No “Free” in Freelancer: Nonprofits Take on Problems of the Emerging Workforce 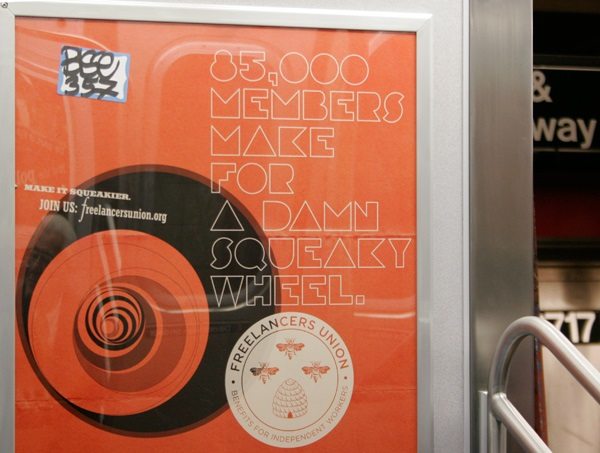 According to a recent study from last September commissioned by the Freelancers Union, an estimated 34 percent of workers in the United States identify themselves as “freelance workers.” In five years, this number is predicted to grow to 40 percent. That’s more than 60 million people by 2020. This burgeoning workforce is also contributing $715 billion annually to the economy—no small change.

Under the umbrella of the term “freelancer,” one can find independent contractors, part-time workers, temporary workers—people probably working in or out of your nonprofit’s office right now. The freelance workforce is part of, and in many ways a product of, the nonprofit sector, which is likely why the sector has been a formidable part of securing freelancer rights.

Despite their status as a major, evolving workforce sector, freelance workers still have few state or federal protections to address nonpayment by clients. Since freelancers are not classified as W-2 employees, the Department of Labor’s wage laws do not apply to them. Often, freelancers must rely on personal effort to ensure they are protected through their contracts; otherwise, they end up in small claims court, where they are usually on their own.

Both unions and the nonprofit sector are currently leading efforts to not only equip freelancers with the resources to secure contracts with clients, but also provide them with crucial advice as they navigate the workforce. As more and more issues regarding freelancer protections come to light through the pervasiveness of social media, we may expect to see more advocacy efforts develop to fight for their essential rights.

For the freelancer advocacy movement, the issue of nonpaying clients is a universal one. NPQ investigated nonpayment as an issue currently taking place within the canals of HudsonMOD, a luxury magazine in New Jersey that has been accused by several of its freelance workers of non-payment. However, in speaking to these freelancers, as well as others in the industry trying to help them, NPQ has observed that this is only one of many deeply entrenched problems with an impact on the freelance workforce.

According to its website, HudsonMOD magazine was founded in 2012 and covers “the best in world travel, cuisine, fashion and leisure to high-income individuals in northern New Jersey and the New York City metropolitan area.” From the events listed on its Facebook page, the magazine appears to have an established philanthropic presence, with several relationships with both big national and small local nonprofits, like CF Charities. They have hosted several events with the Eric Trump Foundation for causes like St. Jude’s Children’s Research Hospital, and supported other philanthropic causes in the recent past like Karma for a Cure – Anti-Bullying, the Lustgarten Foundation’s efforts to cure pancreatic cancer, and the Children’s Institute. On June 23rd, the date of this article’s publication, the magazine is planning to host an anniversary event where the proceeds will go to the Eric Trump Foundation to support St. Jude’s.

Jim Romenesko, who operates and maintains a media blog, wrote in April 2015 about the payment issues some of the magazine’s freelancers were allegedly having after he received an email from one writer, Terry Ward, who continues her fight to collect payment from the magazine.

NPQ spoke with Ward and other freelancers at the magazine, including one who did manage to receive payment from HudsonMOD. Ward, however, is still allegedly owed $3,460 for articles she wrote that were published in the magazine throughout 2014.

“I realized [HudsonMOD publisher Shannon Steitz] wasn’t going to pay me. She was just going to keep saying that it’s in the mail and it just became like this humiliation thing, where I would want to believe her that I was going to get paid and the check would never show up,” Ward told NPQ in an interview in April. “So I took to social media again, and started commenting also on events that they were involved in, saying, ‘Shannon, you need to pay me. This magazine doesn’t pay its freelancers.’”

As may be the case for other freelancers dealing with nonpaying clients, Ward did not have an official contract indicating a fixed rate of pay, either by the word or by the article. Instead, she had an informal agreement with Ty Sawyer, an editor at HudsonMOD with whom she had previously worked with and whom she trusted. Sawyer, who has since left the magazine, described to NPQ his own fight to receive payment from the magazine:

“I spent 20 years of my career developing these relationships with these writers and photographers and art directors and everyone else I brought in and they’re calling me wondering how come they’re not getting paid. I was talking to Shannon and I kept getting, ‘I’ll send her the check. The check was just sent.’ I got it over and over it again. I got it myself as well. And so it was time to terminate that agreement.”

Sawyer reports that of the freelancers he brought to HudsonMOD, a handful have been paid. Writer AC Shilton spent about four months working on a project last year for the magazine. Unlike Ward, however, Shilton did have a standard freelancer contract that she had publisher Steitz sign, although she apparently received the same runaround from Steitz when it came time for payment, and enlisted legal help. After almost six months since the conclusion of her project, Shilton credits receiving a check this March to Romenesko’s call to Steitz indicating he was going to write a story on Shilton’s lack of payment

Shilton recruited a lawyer to help retrieve her unpaid wages, who used the terms in her contract to receive payment. Click here to see the documentation. The invoice has been altered to omit Shilton’s personal information.

“I think social media is changing the ability for people like Shannon to take advantage of freelancers because we can actually talk to each other,” said Shilton to NPQ. “Hopefully, people like her will no longer be able to do things like this.”

NPQ tried for several months to contact publisher Steitz and her attorney with no reply. After explaining this article was due to run, Steitz sent this email to NPQ:

“I understand you phoned my office earlier today with regard to freelancers. In response, I will share with you that HudsonMOD does comply in good faith with its contracts and treats all of its writers fairly and with great appreciation and respect.”

Indeed, in the age of social media, it’s surprising that these accusations against the magazine by the freelancers have largely escaped mainstream scrutiny. Yet, HudsonMOD is just a blip on the radar of an incredibly pervasive problem. Since freelance workers are so vulnerable to falling prey to clients who do not pay, what can they do to protect themselves?

“This is widespread in the industry,” said Larry Goldbetter, president of the National Writers Union, in an interview with NPQ, “and it’s very hard to deal with on your own. The clients and the publishers have more money than the freelancers do. And it’s a common practice for them to stiff people.”

“The first thing you need is a contract,” said Goldbetter. “If you don’t have a contract, you’re pretty much sunk…you’re really at their mercy.” Other sources agree on the importance and value of client contracts. Here, Katherine Erlikh enumerates some of the main points behind arming yourself with a contract even if you know your client. While a contract cannot address every possible issue, it will offer additional protections both to the freelancer and to the client should a situation of nonpayment arise.

A contract is important, but Goldbetter also sees membership in a union as crucial. “All working people need a union. That’s the best shot you have.” According to Goldbetter, within the past year, the Writers Union was able to secure $127,000 for 12 freelancers in a settlement with a nonpaying magazine. Similarly, two years before that, the union helped another 60 freelancers win $350,000 against a “deadbeat publisher.” Currently, the union is working with digital magazine ScratchMag on maintaining a database of “Who Pays Writers?” where freelancers can add information about what rate publishers are paying their writers. Goldbetter hopes this database would also help establish a base payrate for freelance writers.

NPQ also spoke to Mauricio Niebla, a freelancer who battled his own deadbeat publisher and is now a national vice president of the National Writers Union. Both Niebla and Goldbetter noted the promise they saw for the freelance sector in the unionization at Gawker, the online media publication. In a letter to their readers, Gawker writers illustrated their reasons behind the unionization, even though the publication “is a very good place to work.” Aside from giving employees an opportunity to bargain collectively and have their concerns be addressed, the writer Hamilton Nolan also hoped the unionization would spark a change within the journalism industry:

“As journalism has moved online and flourished over the past 20 years or so, union workplaces have become much more rare in our industry. Gawker Media would be the first major online media company to organize…It’s now possible to find a career in this industry, rather than just a fleeting job.”

As the freelance workforce continues to grow, issues of nonpayment are likely to grow with it as more freelancers end up working for deadbeats. Let’s hope that this growth will also lead to freelancers talking and communicating more, and the rise of more organizations like the National Writers Union, Volunteer Lawyers for the Arts, and the Freelancers Union, along with the furtherance of virtual communities like ScratchMag, to help freelancers stamp out unethical practices and forge protections not afforded to them through the law.

At this point, Ward is still using her legal resources to come to a resolution in this case, but she’s not backing down. “I’m not going to shut up because it’s the only way to draw attention to this cause, otherwise, us freelancers, we can just be bullied into shutting up and get scared by a lawyer letter.”

NPQ will be following Ward’s story as it develops, but we also want to continue our coverage of the freelance advocacy movement. The issues in the freelancer workforce extend beyond nonpayment. Despite the appeal of the freelancing lifestyle, without the benefits and steady income of a salaried employee, there are still disadvantages. If you are a freelancer who is part of the movement fighting for freelancer rights, leave us a comment and tell us your story. We would love to hear it.