Nobel Laureate Malala Yousafzai one of Many Young Agents of Change 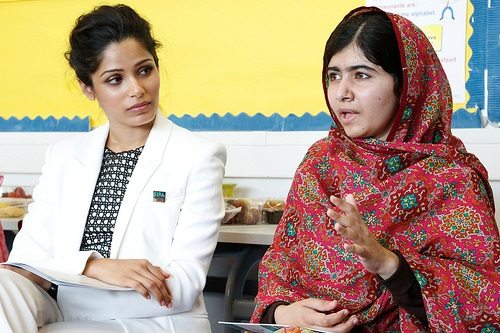 Unless you’ve been living under a rock, no doubt you know that a 17-year-old Pakistani girl, Malala Yousafzai, recently made history as the youngest winner ever of the Nobel Peace Prize. As a fierce advocate of education for girls and a Peace Prize nominee for the second straight year, Yousafzai shared the award with another children’s rights advocate, Kailash Satyarthi of India.

Her story to date is epic in its arc, despite her youth. The daughter of an educator in Pakistan’s Taliban-controlled Swat Valley, Malala’s activism started at the age of 11 when her region’s schools began to ban girls from attending. In response, she launched an online journal in 2009 to document the impact and advocate for girls’ right to an education. Two years later, she was awarded Pakistan’s first National Peace Prize for children under the age of 18 who “contribute to peace and education.” Less than a year later, in October 2012, she was shot in the head in front of her classmates by Taliban gunmen who boarded her school bus. Incredibly, she survived and has continued her campaign at a global level.

Supporters around the world conducted a social media campaign leading to her first Nobel Peace Prize nomination in 2013. That same year, the nonprofit Malala Fund was established in her honor to expand and amplify the voice of women leaders working to improve their communities. In her 2014 Nobel Prize acceptance speech, Yousafzai dedicated her win to the world’s “voiceless children” in whom the Fund now invests. The nonprofit sector provides a valuable structure for this work.

With all these accomplishments in a few short years, here’s perhaps the most remarkable thing of all. In 2011, as covered by NPQ, Malala was a finalist for the International Children’s Peace Prize, but did not win! That year, the winner was Michaela Mycroft of South Africa, a child with cerebral palsy working to expand rights for children with disabilities in her country. The International Children’s Peace Prize, now in its tenth year, recognizes extraordinary young people around the world who are active change agents under difficult, often dangerous circumstances. Each year’s group of finalists has been similarly passionate and courageous; in 2014, the finalists are from Ghana, Russia and the United States. One of them, Neha, started her own organization to help orphans when she was just nine years old.

How hope-inspiring it is to know there are many more Malalas around the world with the drive and savvy to lead major social change initiatives. The students indeed have become the teachers for those of us who have been in the nonprofit sector for years. What more can we be doing to support the emergence of even more young leaders—in our own backyard and around the world?—Kathi Jaworski