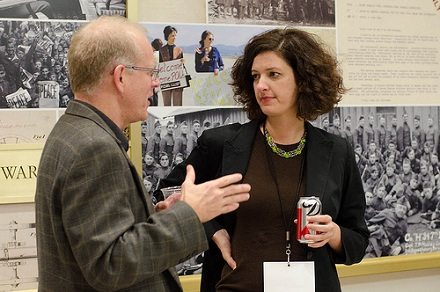 The Harvard University library is leading a nonprofit project to launch the Digital Public Library of America and the initiative has recently received a $1 million grant from the National Endowment for the Humanities (NEH). The grant is seen as just a drop in the bucket of what will be needed to create a national digital public library archive, a massive undertaking that NEH Chairman Jim Leach characterizes as part of “the greatest democratization in the spread of learning that has ever occurred.”

The project will begin with the establishment of a nonprofit that will gather together library projects from assorted states into a nationwide collection. The ambitious plan is to have a test model of the library up and running by April of 2013. Will the rise of massive digital libraries (such as the NEH-funded project or the World Digital Library) lead to a decline in relevance for physical libraries? Leach doesn’t think so. “The relevance of libraries appears to be increasing—and that’s probably counterintuitive to what one might think digitization would imply,” he says. “Libraries are really centers of local culture.”

We hope he’s right about that, but we can think of some questions that this raises, as technological advances often come with unintended consequences. Among the possibilities we can foresee here, we’re reminded of Andrew Carnegie’s words: “There is not such a cradle of democracy upon the earth as the free public library, this republic of letters, where neither rank, office, nor wealth receives the slightest consideration.” The minute you move that library online, however, wealth does receive some consideration, since you generally need to be able to afford a computer and an Internet connection to access online libraries—that is, unless you can find a free computer with a free Internet connection. But that’s hard to find other than at—you guessed it—your local brick-and-mortar library. What other possibilities might you foresee here?–Mike Keefe-Feldman