Notes on the Importance of “Swag” from Obama and Romney 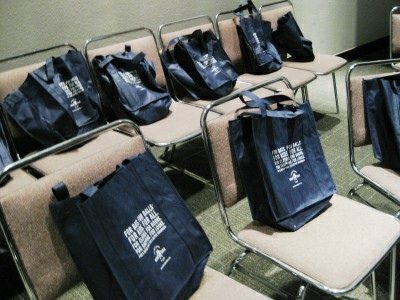 It takes a lot of volunteers to run a successful political campaign, and the unpaid work of calling up voters, holding signs and knocking on doors can lose its luster after about 15 minutes. That’s why the campaigns of President Barack Obama and Republican challenger Mitt Romney are looking to the oft-maligned “swag bag” as an incentive to keep their volunteers motivated to press on.

The campaigns have also kicked the swag factor up a notch, not only rewarding volunteers with inexpensive but potentially meaningful keepsakes, but making a contest out of attaining certain prizes. Romney campaign digital director Zac Moffatt briefly summarized the campaign’s program of “swag” incentives, telling the Associated Press, “The more you do, the more you deserve to get rewarded.”

For the campaigns, the “swag” itself can range from bumper stickers for routine participation to sweatshirts for more involved volunteer work and even, in one Obama campaign case, to a signed copy of the president’s recent State of the Union speech for the superhero volunteer.

As unimportant as it may sometimes seem, the lesson for nonprofits here is not to ignore swag and simply assume that one’s volunteers will remain motivated solely due to their dedication to the mission at hand. Instead, you may want to consider stealing a page from the presidential campaigns’ playbook and offer your volunteers something tangible. It may not matter to all, but it will to some. One thing to keep in mind, however, is that many “swag bags” will undoubtedly wind up in landfills, so if you don’t want to balance the weight of volunteer rewards on the back of Mother Nature, NPQ recommends looking into some biodegradable swag. –Mike Keefe-Feldman