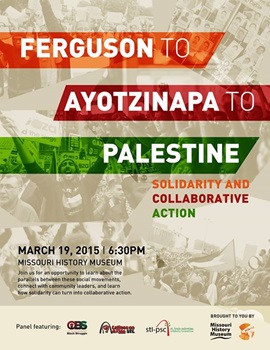 A last-minute cancellation of a workshop designed to unite people in conversation regarding various social issues illustrates the growing difficulty the Israel-Palestine conflict poses for publically supported organizations.

The workshop was developed by four Washington University campus groups: AltaVoz, Latinos en Axión STL, the Organization for Black Struggle, and the Saint Louis Palestinian Solidarity Committee. Originally, the organizers planned to use the challenging events in Ferguson and in Ayotzinapa, Mexico, as springboards for the conversation. The Missouri History Museum agreed to cosponsor the event and to host it in its facilities. After the agreement was reached, the groups decided to add Palestine to the subject mix with no reaction from the museum.

Only two days before the scheduled date, the museum reversed its decision and said the event could not proceed if Palestine was kept on the agenda. The Museum explained its change of mind in a statement posted on its web site.

“We were initially open to the changes and posted information about the program on our website. However, when the president of our organization learned of this event, she urged…staff to review the program through the lens of relating to our exhibits and collections. She also had questions about why a Washington University student event was not being hosted on campus…We are currently in the process of planning a moderated panel discussion related to Palestinian and Israeli history for later this year. This event will include the plurality of voices that we believe is needed to adequately address the complexities of these historical events.”

The announcement was met with criticism by organizers and intended attendees. As reported by Willis Ryder Arnold for St. Louis Public Radio:

“Event organizers maintain the reason they were given for the cancelation was solely the inclusion of Palestine. [AltaVoz organizer] Deren Pulley…said they worked to ensure the event was not framed by Washington University, but the St. Louis public. ‘We wanted as much community participation as possible, as much community discourse and dialogue, and we figured that the History Museum, being a space for public forums and public discussion, would be the perfect venue.’”

Some suggested over Twitter that the museum’s decision was influenced by board members or donors who didn’t want to discuss the Palestinian conflict. “Not at all,” said museum president Francis Levine.

It is clear that the addition of Palestine became the tipping point. And it is also clear that something happened to cause the museum to reconsider. Exactly what changed seems unclear. Was it that the museum began to hear the voices of important supporters concerned about how the Israel-Palestine challenge was going to be discussed at a time of growing controversy nationally and internationally? Or was this just a case of a staff error, as the museum claims?—Marty Levine