The Pennsylvania School Board Association (PSBA) just released a report analyzing the budgets of their state’s charter schools in an effort to “take a closer look at how charter schools and school districts are spending public funds.” Their interest is rooted in the intense competition for funding between what have become two often-antagonistic elements of what should be a coordinated effort for a high-quality public education system. In their efforts to create greater transparency among charter school operations, the study found that traditional public school districts and charter schools appear to have significantly different priorities for allocating their budgets.

The information used in the study, covering the years 2009–2015, was obtained for 85 percent of Pennsylvania’s 173 charter schools and for all of the public school districts. The data under analysis was gathered from publicly available sources: the State Department of Education, IRS 990 filings, and, when needed, right-to-know requests. 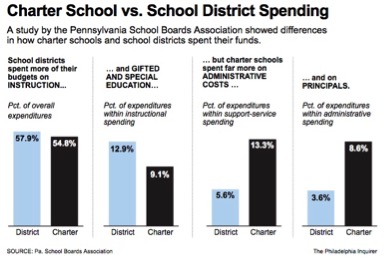 Traditional school districts also have costs that charter schools are not asked to bear. They are required to provide transportation for students who attend their own schools as well as those who attend charter schools, even some outside their district boundaries. This takes more than five percent of their budgets. They bear the cost of collecting the tax funds that are then shared with charter schools.

The PSBA pointed out that charter schools “allocated a substantially greater proportion of their budgets to chief school administrators, principals, and other administrative services than school districts.” Caitlin McCabe, writing for the Inquirer, reviewed the PSBA’s report and found that “charter-school administrative expenditures are nearly double those of conventional public schools, and their highest-ranking officials are paid far more.” On a per-pupil basis, a public school district spends less than $50/pupil on their chief executive, as compared with $130 at the average charter school. Charter schools also appear to spend a greater portion of their funds on their facilities than traditional public schools do.

Looming larger than these details is the reality that in Pennsylvania, and perhaps many other states, the public education system is so uncoordinated. Responsibility for educating a community’s children is fragmented between publicly accountable school boards and privately operated but publicly funded charter schools. This means two different approaches with no mechanism to ensure their decisions reflect a shared understanding of the best ways to teach a community’s children and invest its taxes. For those who believe this competition is good and leads to strong schools, the system still does not guarantee its “customers” have access to all of the data needed to make informed decisions. Change is sorely needed.—Martin Levine