PETA vs. SeaWorld: The Creative Tactics and Tech that Drive PETA’s SeaWorld Campaign 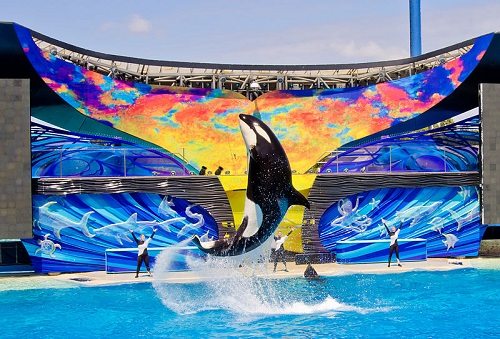 The chase scene in the documentary Blackﬁsh felt like someone punched me in the stomach. A convoy of high-speed ﬁshing boats races across the sea in pursuit of a baby orca while the adults in his pod try to intervene. In the end, an orca who will become known as Tilikum is netted and hauled aboard ship. The adult orcas cry. Even the human crew appears pained. Years later, one sailor tells Blackﬁsh director Gabriela Cowperthwaite that trapping Tilikum was “the worst thing I have ever done.”

For PETA (People for the Ethical Treatment of Animals), Blackfish was a gift. Since 1998, it has been campaigning to free Tilikum and others like him. National Campaign Manager Katie Arth says, “Animals are not ours to use for entertainment.” Her organization mixes strategic opportunism and digital technology to promote this view. The Blackfish broadcasts on CNN injected new life into the SeaWorld campaign.

For 30+ years, Tilikum has lived in a chemically treated tank that in human terms is equivalent to a bathtub. He was previously the property of Sealand, but is now owned by SeaWorld. While Tilikum’s main role is to perform for human audiences, he has a track record for deadly behavior.

In 1991, Tilikum and two other orcas killed 20-year-old Keltie Byrne, a student that was a part-time trainer at Sealand. In 1999, at SeaWorld, he was allegedly responsible for the death of 27-year-old Daniel P. Dukes, who had entered the orca tank after closing hours. In 2010, Tilikum drowned 40-year-old veteran trainer, Dawn Brancheau. Following this fatal incident, OSHA banned trainers from close contact with orcas, a decision that SeaWorld is appealing.

PETA maintains that the orcas are driven mad by inhumane treatment. It advocates for a different theme park model—coastal sanctuaries—where people could see the orcas in their natural environment from a whale-watching ship. PETA’s initial communications activities generated empathy for Tilikum and other captive orcas, but the message didn’t resonate much beyond committed animal welfare activists.

Once PETA began calling attention to Blackfish, support soared, with thousands of people visiting the campaign website, SeaWorldOfHurt.com. According to Arth, PETA’s Twitter account set a new record for retweets—4,190. The hashtags #blackfish and #blackfishonCNN trended, largely the result of PETA’s active marketing team that was live tweeting while watching the broadcast and public discussions. A month later, PETA’s tweet marking the 30th anniversary of Tilikum’s capture from the wild was retweeted more than 4,500 times.

PETA has a tradition of creative opportunism. In 2012, for instance, they sued SeaWorld in federal court on behalf of captive orcas. Tilikum v. SeaWorld argued that five wild-caught orcas deserved protection under the Constitution’s 13th Amendment, which prohibits slavery. They lost the case, but gained media coverage, visibility, and more supporters.

In 2013, when SeaWorld sponsored a float in Macy’s Thanksgiving Day Parade and the Tournament of Roses Parade on New Year’s Day, PETA volunteers stood along the route to protest. Over 100 were at the Rose Parade this year. At the last Macy’s parade, 12-year-old activist Rose McCoy received national media coverage when she jumped a barricade while holding a “Boycott SeaWorld” sign at both parades.

In April 2013, when SeaWorld’s stock went public, PETA became a shareholder, giving it the necessary standing to offer a resolution at SeaWorld’s annual meeting, calling on the company to create a coastal retirement sanctuary for its orcas. This got attention from serious media, including a major feature on Fox Business, an outlet not usually associated with progressive nonprofits.

Then, in February of this year, SeaWorld attempted to block PETA’s resolution by exploiting a loophole in securities law. It petitioned the Securities and Exchange Commission—successfully, it turns out—for permission to ignore the resolution. This sparked additional media attention from top media outlets, including Reuters.

According to a story in the Orlando Business Journal, SeaWorld has deployed tactics such as stuffing the newspaper’s online ballot box for an opinion poll about Blackfish.

PETA contends that SeaWorld also featured misleading copy in a paid advertising blitz designed to discredit the campaign. Never one to pass up an opportunity, PETA posted a video rebuttal on its website, using social media to drive traffic to it.

Another tactic PETA employs is to target companies that do business with SeaWorld. At the top of the list is Southwest Airlines, which paints its planes to resemble orcas. Activist Robin Merrit recently presented a Change.org petition at Southwest’s Dallas headquarters, to no avail. Southwest CEO Gary Kelly stated that the airline is not considering changing its relationship with SeaWorld, a response that deeply disappointed Merrit, who noted that many entertainers had cancelled gigs at SeaWorld in response to Blackfish and PETA. “I hope Southwest will stop cheerleading SeaWorld’s cruelty just like many artists including Willie Nelson, Martina McBride, and Heart have already done,” Merrit told Eric Nicholson, a blogger for the Dallas Observer. In turn, Nicholson ended his story with this: “That’s right, Southwest. Heart has more moral courage than you. Time to take a good look in the mirror.”

By using a wide array of tactics and technologies, PETA reaches different target audiences through the media each prefers. Some people respond to video, others are energized through live protests, others read their local newspapers. PETA identifies multiple pressure points where it can make its influence felt, then bombards its target audiences from every possible angle—and they are very tenacious about this. In the case of SeaWorld, PETA has been campaigning for 16 years. Blackfish provided a huge boost, that’s true, but part of the reason it had such an impact is because PETA knew how to leverage it.

Bonnie McEwan is a member of the NTEN: Change Editorial Committee, a consultant, college professor and writer. She is profiled in the book, Thriving in 24/7: Six Strategies for Taming the New World of Work, by Sally Helgesen, and author of “501(c)(3) Nonprofits and Earned-Income Generation” in the textbook, Social Entrepreneurship, edited by Thomas Lyons. Earlier in her career Bonnie directed the national communications divisions of Girl Scouts USA and the Planned Parenthood Federation. Find her on Google+ and Twitter as @BonnieMcEwan.