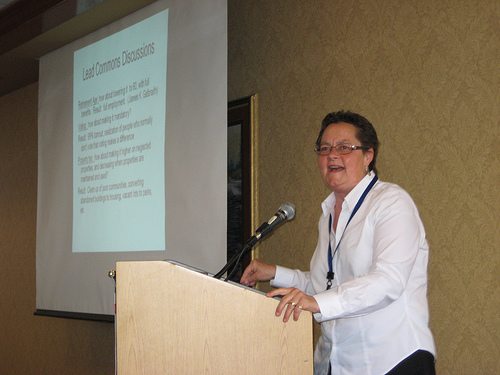 Kim Klein is legendary in the nonprofit world as an expert fundraiser and passionate advocate for social justice, inclusive communities and progressive tax reform. She urges people to take courageous stands, to fight for fairness and to work at the level of system change. She’s unapologetically leftist and openly lesbian, but even she has hesitated to go public about a key part of her world view until now.

As she writes in a recent article for Blue Avocado, Kim Klein wants to go on the record as a religious Christian—a religious Christian feminist who frequently asks herself not only “What would Jesus do?” as a guide for her action, but also, only half-jokingly, “What would Jesus bomb?” and “Who would Jesus deport?” She’s tired of seeing the religious right dominate public discourse about how religion and politics intertwine. And while she notes that there is a religious left, she is also tired of hearing statements from progressive colleagues like, “Can you believe that Santorum? He’s such a clear example of why any intelligent person leaves religion behind.”

She takes pains to note that she doesn’t want to evangelize, but rather to urge progressives who do draw their deepest convictions from religion to speak up from that context. She argues that “It’s time for all of us who are religious (and not just spiritual) to come out, warts and all, and to say that we will not stand for all that is good in our religious traditions to be used in the war on women and people of color. We will stand up against people claiming to be religious who also claim that corporations are people or that money is speech.”

Why do you think this is such an uncommon public stance? And what’s your reaction? –Kathi Jaworski