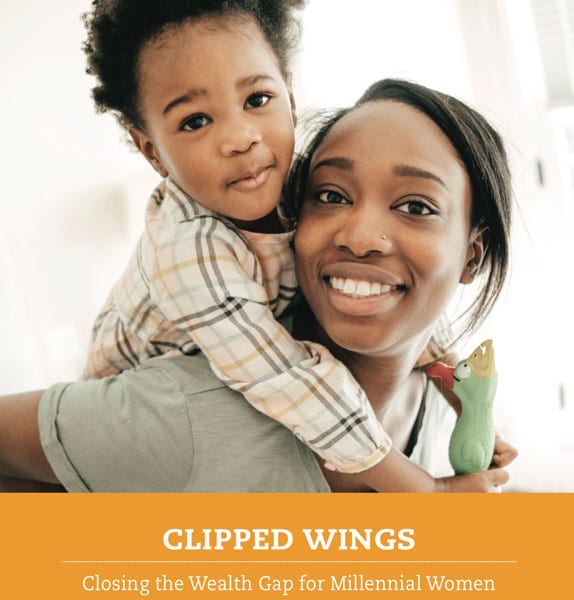 A new study co-published by the Asset Funders Network and the Closing the Women’s Wealth Gap Initiative examines the large gap in household wealth between households headed by men and households headed by women and suggests steps that nonprofits, philanthropy, and policy can take to close that gap.

The report, Clipped Wings, is written by Jhumpa Bhattacharya and Anne Price from the Insight Center for Community Economic Development (ICCED) and Fenaba Addo of the University of Wisconsin, Madison. In it, Bhattacharya and her colleagues take a detailed look at just how gendered wealth inequality in the US is and how new government policies and philanthropic practices could change those dynamics.

To do this, the report focuses on women born between 1980 and 1997, the so-called millennial generation. Bhattacharya, a report coauthor and vice president of programs and strategy at ICCED, notes that women from this generation face many challenges.

“Many of them entered the workforce during the Great Recession,” notes Eillie Anzilotti in Fast Company, and are “mired in an economic landscape of stagnant salaries and rising costs.”

The report identifies the lack of paid leave as one key factor that perpetuates inequality. In 2017, 57 percent of mothers between the ages of 20 and 37 who had babies were unmarried. But US policies still presume that most households have two parents. Combine the challenges of single parenting with rising student debt and you have a recipe for deep wealth inequality.

“We’re seeing that tuition has risen at a skyrocketing rate along with more women and students of color attending college,” Bhattacharya says. “You can call me a conspiracy theorist, but there’s a connection there—as more women and people of color are using education as a stepping stone, it’s becoming increasingly difficult to actually gain wealth from it.”

Women graduate, the report notes, with an average of $20,263 in student debt. Anzilotti adds, “Debt is especially burdensome for black and Latinx students, who tend to have less intergenerational wealth and who consequently can access less financial support from their parents than their white peers.”

In outlining places where funders and nonprofits could intervene, the report notes that “racial and gender wealth inequities…are key issues of our time” and hopes that philanthropy can help develop a framework for analysis and systemic change.

One philanthropic initiative the report highlights is a pilot cash guarantee program launched in 2018, which is giving “15 low-income Black female-headed households in Jackson, Michigan, a monthly cash benefit of $1,000 with no strings attached.” With participating families making an average of about $11,000 a year, this more than doubles their income. The project aims to “track and learn how families are spending their cash benefit, and aims to answer questions such as: If we offer families a little bit of breathing room, will they be able to dream about something a little bigger? If financial survival were not always top of mind, would community leadership and activism become a real possibility?”

In appendices, the report lists both challenges and potential solutions. Optimistically, the authors conclude that “the growing economic insecurity of this generation of women is not inevitable, nor is it irreversible.” To reverse these trends, the authors add, requires using a race/class/gender intersectional lens that “puts women at the center of future policy decisions and [reimagines] how our systems operate.”—Steve Dubb

How College Admissions Stack the Deck against Low-Income Applicants

A New Ford Joins the Ford Foundation Board

CDFIs and the COVID-19 Moment: Whither Now, Community...