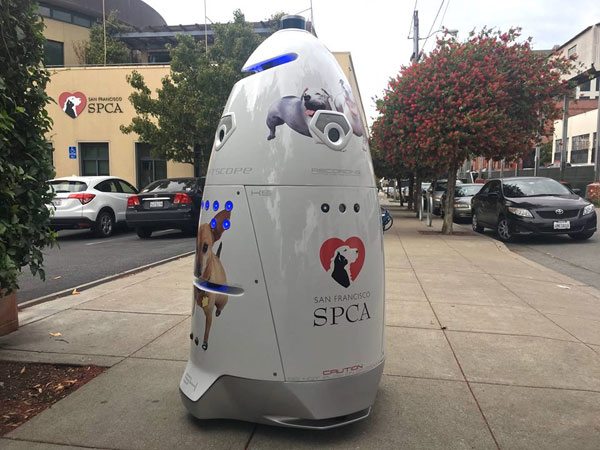 It is truly the material of heart-pounding nonprofit management nightmares. Your buildings and property have been burglarized, leading to a crunch in your ability to provide services, costly repairs, volunteers worried about their safety, and a blow to staff morale that “someone could do such a thing.” Now, imagine the break-in you just heard about occurred at an animal shelter with hundreds of cats and dogs under your care.

The stakes are high, but such is life in the nonprofit sector, where the budget is usually too tight, especially for extras like appropriate levels of security. The San Francisco SPCA might have found a solution that is anything but average—and a few heads may turn to see that their newest security guard is something other than human.

Dubbed “K9” by shelter workers and volunteers, a Knightscope K5 security robot has been deployed by the SPCA to assist two human security guards. The five-foot, 400-pound robot, at a rent of $7 an hour, collects audio and visual data. It even scans license plates in the parking lot and alerts clients if a flagged plate appears on site.

Technology is great…when it works. The K5 model, while it is touted as an affordable security option, has some baggage. A K5 robot knocked over a toddler and kept right on going at a Silicon Valley mall last year, and another robot reportedly drown itself by driving straight into a Washington, D.C. fountain. In April, an intoxicated Mountain View man was arrested for knocking over a K5 while it was on patrol. As a testament to its robot sense of duty, the perpetrator was identified and caught thanks to the information recorded by the robot during the attack.

Apparently, though, K9 is earning its keep. Krista Maloney, the SPCA’s spokesperson told Mission Local “There’s been a significant decrease in graffiti, car break-ins, and the number of encampments around their parking lot.”

In addition to more traditional kinds of crime and vandalism, animal shelters are targets for unscrupulous actors looking to steal supplies, like fencing or stockpiles of food, and those with even darker intentions. Shelters have had to ward off break-ins from individuals wanting to steal dogs confiscated from dogfighting rings awaiting the outcome of court cases. Some are even perpetrated by owners trying to take back their own pets to circumvent local municipality and shelter policies requiring payment of fines and dog licenses. In an effort to stem a rash of burglaries to steal confiscated pets, the Josephine County Animal Shelter recently installed an alarm system and razor-wire fencing to ward off intruders.

The San Francisco SPCA should be applauded for casting their net far and wide when looking at options when it comes to keeping their furry charges, staff, and visitors safe. As for the future of “K9,” the shelter will crunch the numbers when the trial run ends.—Carrie Collins-Fadell