Should Ronald McDonald Be Expelled from School? 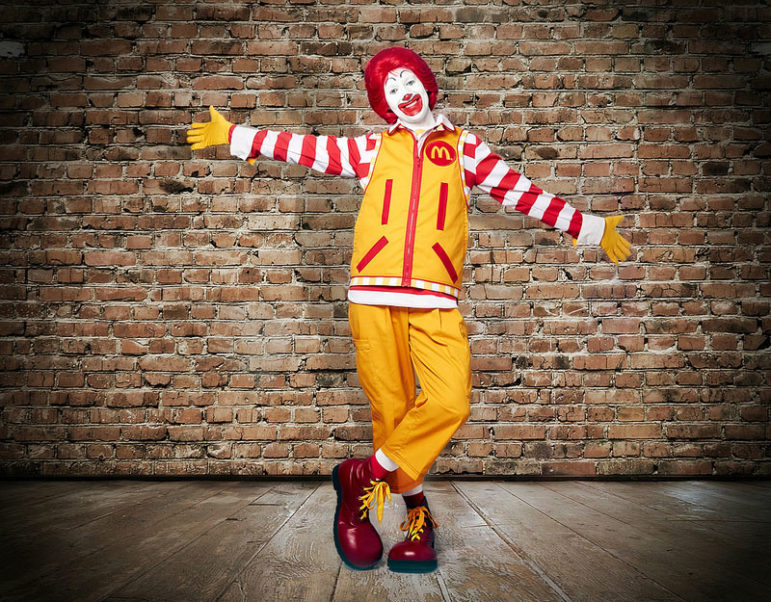 School-age children spend more than $4 billion annually and strongly influence how their parents spend many billions more. Many schools struggle to find enough money to offer their students a quality educational experience. Businesses want access to the children’s market, and schools want to share in their profits if they can. Here’s a bargain that looks like a win-win but can all too easily place the best interests of children to the side.

Teachers and children’s advocates nationwide have been protesting one particular school-business partnership they say has gone too far. Despite nationwide recognition of a childhood obesity epidemic, candy companies and fast food vendors are still considered by some to be valued school partners. Boston University public health researchers Daniel G. Aaron and Michael B. Siegel told YES! Magazine that these arrangements are a confluence of “predatory marketing practices and questionable conflicts of interest with major junk food companies.”

What’s now drawn the fire of teachers and advocates are McDonald’s “McTeacher’s Nights.” During a McTeacher’s Night, according to an excerpt from the McDonald’s site that’s since been expunged, “educators, students, parents, and friends are invited to their local McDonald’s to ‘work’ and raise money for a designated school-related cause. Monies go towards sports uniforms, band equipment, theater needs—whatever the school decides! Parents and children are encouraged to come to their local McDonald’s to see their very own educators serve up hamburgers, fries, and shakes! A portion of the sales from a designated time period is donated to the school for its specific fundraising need.”

This month, teachers in the Los Angeles United School District, whose schools have sponsored 120 McTeacher’s Nights since 2013, asked McDonald’s to end the program in their district and their members to stop participating in future fundraisers under the golden arches. An open letter “from more than 50 local and state teachers’ unions throughout the United States to McDonald’s CEO Steve Easterbrook…highlighted the harmful impacts of marketing junk food to children: namely, the spread of diet-related diseases like obesity and Type 2 diabetes, described in the letter as ‘the largest preventable health crisis in the U.S.’”

United Teachers Los Angeles (UTLA) cited “the fast-food giant’s predatory marketing practices and exploitation of both kids and teachers” as reasons to end the practice.

While McDonald’s sees a current and future financial benefit to these partnerships, the actual benefit to participating schools is a matter of dispute. The restaurant returns 15–20 percent of the evening’s proceeds to the participating school. With most meals at McDonald’s costing less than $8, this translates into a “profit” of less than $2 per student. As UTLA Vice President Cecily Myart-Cruz observes, “I’d have to do six fundraisers to make [enough] money. It’s exploitation.”

McDonald’s defended their efforts to support schools in response to a 2015 inquiry from Washington Post Education Editor Valerie Strauss.

“Teachers and parent teacher organizations have a choice in how they seek to raise additional funds, and for years they have told McDonald’s and franchisees that, in addition to the extra financial support these events provide for their schools, they have a great time connecting with their students and neighbors.”

Lisa McComb, McDonald’s USA’s [then-director] of media relations believes they are much more profitable than does UTLA, telling the WP, “From January 2013 through September 2015, the company-owned restaurants (10 percent of all US sites) have paid over $2,525,000 to organizations for donations from McTeacher Nights.”

Sounds like a lot of money, but it pales when you recall that we spend hundreds of billions of dollars on just our public schools. Making it possible for schools stop a bad practice would not require very much new money at all.—Martin Levine