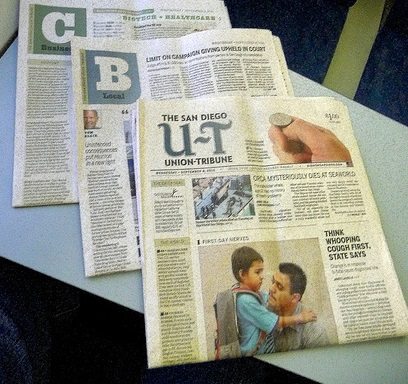 The Columbia Journalism Review (CJR) reports on a possibly portentous development in San Diego, where Malin Burnham, a retired real estate developer, confirmed that he was pursuing a plan to take the daily U-T San Diego (formerly known as the Union Tribune and once Copley Press’s flagship paper) under non-profit ownership.

CJR calls the move “a variation on an idea that has become familiar in recent years: the wealthy local businessman-philanthropist rides in to save the local paper, either as a non-profit or commercial venture.” The nonprofit business model is gaining traction as traditional newspapers struggle in the digital era.

Burnham told CJR that rather than waiting the months or years required for IRS certification, he’s been talking to existing nonprofits in San Diego about buying the U-T. Under his plan, the U-T itself would remain a for-profit social enterprise, making one of America’s larger metropolitan dailies into a “community newspaper—owned by the community.”

Burnham has talked to three of San Diego’s biggest nonprofits about becoming fiscal sponsors for the paper: the San Diego Foundation, the Jewish Community Foundation, and National University, with the first being the most likely because it has $674 million in assets and focuses on civic engagement and grants to local charities. Burnham wants to raise the purchase funds from a small group of investors rather than have the foundation put up all the money.

Neither the leadership of the foundation nor the current owner responded to the CJR’s inquiries, although neither disavowed the concept outright. The current owner is reported to have paid more than $110 million when he bought the paper in 2011 from a private equity firm, which paid less than $50 million in 2009 to acquire the paper from Copley.

Burnham told CJR that he envisions a nonprofit-owned U-T that would “support things that are going on the community” without taking a partisan line. There have been many complaints about U-T’s current owner, a real estate developer active in conservative politics, for turning the paper into a “pro-conservative, pro-business, pro-military” publication that promoted his interests without any of the diversity of views large newspapers have traditionally had.

CJR speculates on the paper’s future if Burnham can pull off the transaction, saying a paper owned by an “established nonprofit that already knows the logistics of running a tax-exempt organization…with a history of charitable works could bring goodwill and community buy-in that a new journalism-focused nonprofit might never be able to attain.”

However, Burnham is realistic about the current economic climate for metropolitan dailies: “We anticipate that profits of community newspapers will continue to decline, but we also believe that the demand for news will not shrink,” adding, “We can live with smaller profits than they’re now getting, by far. If we had half of the profits, we’d be doing quite well.”—Larry Kaplan