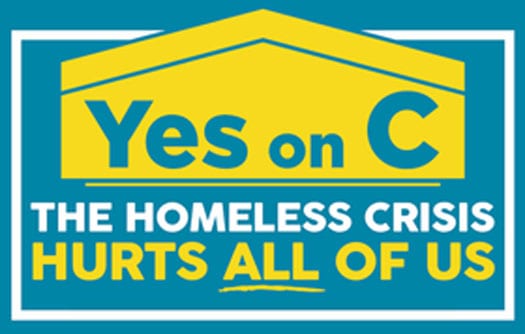 In a city ballot measure that bizarrely pit tech titans against each other and attracted national attention, San Francisco voters ultimately approved Proposition C with nearly a 60-percent yes vote. As the Chronicle’s Kevin Fagan explains, the measure provides “the most money ever directed at city homeless programs by taxing big businesses to raise hundreds of millions of dollars.”

Fagan adds that the tax “will charge corporations with revenue above $50 million about 0.5 percent in gross receipts tax, with the proceeds going entirely toward homeless programs. Budget analysts estimate it will raise between $250 million and $300 million a year—nearly doubling the amount already being spent on homeless services and housing.”

The law required a simple majority to pass, but a legal challenge is expected because the measure failed to get a two-thirds vote, which is required for local government “special taxes” under California’s state constitution. Salesforce CEO Marc Benioff has pledged to “lend the full capabilities of his legal team” if a challenge is filed in court.

While the California State Supreme Court ruled last year that voter-initiated tax measures like San Francisco’s housing levy require only a simple majority, the rules of when a two-thirds vote is required remain murky.

Fagan writes that if the tax is challenged in court, “it is probable that the tax will be collected and merely banked—not spent—while the legalities are worked out. That could result in a whopping pot of built-up cash that becomes suddenly available down the line.”

The initiative, Fagan explains, clearly outlines where the money will go. About half of the $300 million is for permanent housing for homeless people, a quarter for mental health services, up to 15 percent for supportive services for at-risk populations, and up to 10 percent for emergency shelter and hygiene programs. The levy is expected to finance housing for at least 5,000 people and result in 1,000 new emergency shelter beds.

Fagan reports that, “As many as 400 companies, making up 15 to 20 percent of the city’s job base, will be subject to the new tax.” The city’s chief economist, Tim Egan, has estimated the employment cost at a modest 875 jobs over the next two decades. Egan also noted that Proposition C would reduce homelessness, improve health, reduce the costs of emergency services, and “increase the attractiveness of the city to tourists, residents and commuters.”

In terms of the national scene, San Francisco offers a stark contrast to Seattle. In Seattle, a much smaller tax designed to raise $47 million was initially approved by the City Council. But after Amazon, Starbucks and others qualified a repeal measure, the City Council folded and rescinded the measure without testing support at the polls. In San Francisco, by contrast, a larger $300-million tax was brought to the voters—and passed handily.

One reason for this different outcome, suggests Heather Knight, also writing in the Chronicle, is that the need for more resources was so obvious. Knight adds that something is amiss when “in one of the cities with the biggest income inequality gap in the world—where a household has to earn $300,000 a year to buy a median-priced home—CEOs are donating hundreds of thousands of dollars to prevent their companies from paying a small amount to house homeless people.”

For another perspective on the consequences of Proposition C, listen to Stanford professor Rob Reich in his podcast interview with NPQ’s Amy Costello.—Steve Dubb