Seceding from the Union: Online Edition 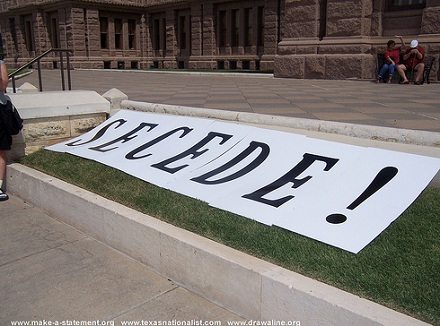 In the wake of President Barack Obama’s re-election, it appears that some citizens are so upset at the prospect of “four more years” that they no longer want to be considered Americans. While this is hardly the first time voters have gone away mad enough to threaten to take their business elsewhere, we now have a way that people can voice their collective disgust. Voters in most states have now added their signatures to petitions on the White House’s “We the People” online petition site stating that they would like to secede from the union. The White House has previously pledged to review any petitions on the site that reach more than 25,000 signatures, which means the Obama administration will need to review secession petitions that have surpassed that threshold from Alabama, Florida, Georgia, Louisiana, North Carolina, Tennessee and Texas.

Many of the petitions use similar language: “Peacefully grant the State of [X] to withdraw from the United States of America and create its own NEW government.” NPQ has covered a variety of online petitions encouraging activism on the part of citizens in one form or another, but this is the first one we’ve seen to gather significant traction on the idea of essentially disbanding the United States of America. Of course, those who have signed on represent a small minority of the overall population in each of the petition states, but if the scars of electoral losers are so raw that some people are willing to quit on America entirely, is it any wonder that a new Washington Post/Pew Research Center poll finds that 51 percent of respondents think President Obama and Republican lawmakers won’t be able to work out a deal in order to avoid the so-called “fiscal cliff” that looms come the new year?

The message for nonprofits who want to help the wheels of democracy turn in order to avoid the painful automatic cuts that would come with budget sequestration if no “fiscal cliff” deal can be reached? We’ve got work to do. It is not necessarily to calm the fringe elements represented by the secessionists—who we think might not be so cavalier about clicking the mouse to break away from the U.S. were they to actually experience what that would mean for many of them in terms of the economy and infrastructure they’d be left with if they got their wish. Rather, it is to help rebuild the capacity of government to govern.

In D.C., that happens by reframing “compromise” so that it is no longer a dirty word but rather a prerequisite for holding elected office. And on the local level throughout the U.S., that happens by citizens, perhaps convened for civil discussion by nonpartisan nonprofits, reaching out to one another—particularly those who may have different political beliefs—and reminding one another that, despite these headline-grabbing petitions, there is still much more that most Americans can agree on than we disagree on.

What is happening in your community, if anything, to reach across the divide? –Mike Keefe-Feldman