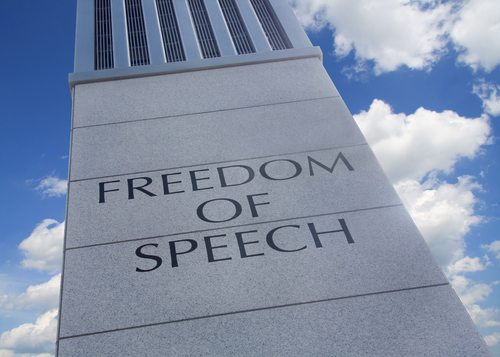 Issues about free speech, censorship, the need for adult supervision of school-related publications, and more are being stirred up in Fond du Lac, Wisconsin. Community members, students, and free speech advocates, among others, have crowded a local school board meeting over concerns that a student-led magazine in the high school will be censored in the future. The superintendent of the school district invoked a rarely implemented board policy from 1988 requiring pre-screening and approval of all student publications by administration.

This all started with the publication of an article about rape culture in the February issue of Cardinal Columns, a magazine written and edited by students. In the cover story, the author, Tanvi Kumar, describes what she perceives as a tolerance of rape in the school and a tendency to joke about it and blame the victim. According to teachers at the school, the article has been very effective in raising awareness, and they have been able to use it to spark discussions about the subject in their classrooms. It was also reported that a local sexual assault victims group has seen a rise in the number of people stepping forward and asking for help following the article’s publication.

The superintendent, however, suggested that it was important to implement the board policy, ensuring that nothing would be published in the future that might disrupt the educational process or threaten the students in any way. He specifically mentions a photo in the article of a student surrounded by cardboard boxes who may or may not have clothes on, some word usage in the body of the article he felt was inappropriate, and an editorial letting students know they have the right not to stand during the Pledge of Allegiance and encouraging them to test teachers to see if they know of that right.

Students launched a petition drive and have collected more than 5,000 signatures, encouraging the school board to overturn the policy. Advocates are suggesting that the policy will lead to censorship by the administration or self-censorship by the students. It is also suggested that the action will cause victims of sexual assault to think again about speaking out, since a writer who spoke out on their behalf was being silenced.

Some school board members say they are confident that the principal will not misuse the policy, and that some subjects are not appropriate for student-led publications. The suggestion is that the students are too young to talk about these subjects, but one of the victims discussed in the article was five when she was assaulted. It would be interesting to learn why the superintendent thought an article fostering discussion of the rape culture among students might be disruptive of the school’s educational environment.

The issue will be taken up at a board meeting in April.—Rob Meiksins