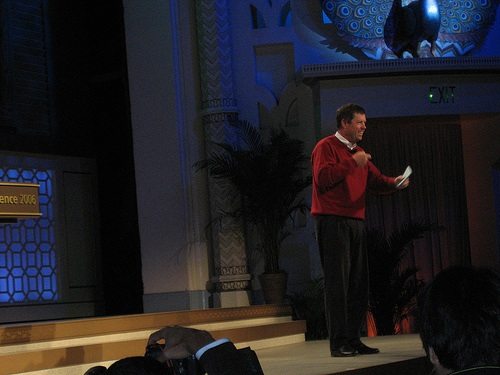 One would expect Scott McNealy to be free with his opinions. McNealy is the founder of Wayin, a platform for tapping into the power of chatter on social media, and of Curriki, the online forum for blogging and sharing about education. McNealy was also a cofounder of Sun Microsystems—and Sun developed and championed Java, the popular open access software. Therefore, it’s also no surprise he is not entirely a fan of Bill Gates (of whom he once said, “In a world without fences, who needs Gates and Windows?”)

His latest dig at the founder of Microsoft is a backhander about his philanthropy. “The last thing I want to do is tell Bill Gates and Warren Buffett how to spend their money,” he said on CNBC’s Squawk Box. “But imagine if they had taken their tens of billions of dollars, chopped it up into $5 million chunks and pledged it to a business plan, sponsored by an MBA graduating from an MBA school.”

In all probability, McNealy may never have been asked by Gates and Buffett for advice. Or to join their Giving Pledge, the club for billionaires who promise to give away at least half their fortune during their lifetimes. McNealy’s wealth is unclear, but he is not one of the Forbes 400 billionaires from which the Giving Pledgers are largely drawn. He does, however, belong to those who have made their name and fortunes in technology services and software. They are the second largest group of pledgers after bankers, according to the Foundation Center’s “Eye on the Giving Pledge”

His public disdain for philanthropy is reminiscent of other notable Pledge agnostics. The world’s second-richest man, Carlos Slim, is one, famously declining to join those “who went around like Santa Claus.” He told CNBC in January 2011, “What we need to do as businessmen is to help solve the problems, social problems. To fight poverty, but not by charity.” Mukesh Ambani, currently the richest Indian, went to watch cricket instead of attending Gates and Buffett’s Indian Giving Pledge recruitment drive. Ambani told Indian television that circumstances in India are different: “What is important is creating wealth” and giving only then. He added that, “inheritance tax is the reason that most people in the U.S. give.”

Both, however, do practice philanthropy: Slim through Fundación Telmex and Fundación Carlos Slim Helú, and Ambani through the Reliance Foundation.—John Godfrey