TANF Turns 15 Years Old: How Well Is It Weathering the Great Recession?

August 22 and 24, 2011; Source: Center on Budget and Policy Priorities | Fifteen years ago this week, President Bill Clinton signed welfare reform into law. AFDC was scrapped and replaced with a new program, Temporary Assistance to Needy Families (TANF). Soon after, the welfare rolls began to decline, the proportion of single mothers working outside the home rose, and the poverty rate fell. A smashing success, right?

More like a case of great timing. The late 1990s were a period of robust economic growth, halcyon days when the Fed allowed unemployment to decline to levels that were previously thought to spark inflation. The result was a labor market that offered a job to just about everyone who wanted one.

But of course those good times were also fueled by rising household debt and an asset bubble. They didn’t last. Since 2000 we’ve seen two recessions and anemic job growth even during the so-called recoveries. And so now, for the first time, the poverty rate has inched back above the level it was at in 1996 when TANF was enacted. Where’s your TANF now?

This week, on its invaluable Off the Charts blog, the Center on Budget and Policy Priorities is looking back at the first 15 years of TANF. There’s just too much good stuff to summarize here, but here are a couple of key points that might be of interest to nonprofits that work with the poor or have TANF-funded government contracts:

TANF now covers far fewer families in poverty than it did at the outset. 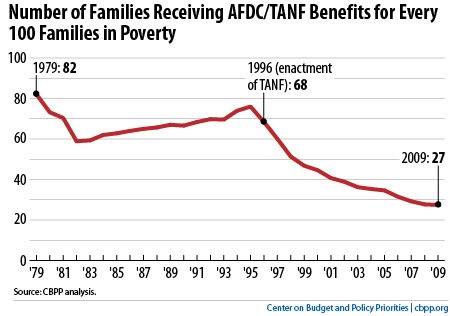 The obvious questions: With fewer poor families receiving welfare benefits than at any time in the last 30 years, what is filling the gap during this brutal recession? And how has the dwindling role for TANF since 1996 affected nonprofit human service providers?

TANF dollars are increasingly directed to services rather than direct cash assistance.

In 1997, states used 71 percent of TANF funds to provide basic cash assistance. By 2009, that figure had dropped to 28 percent: 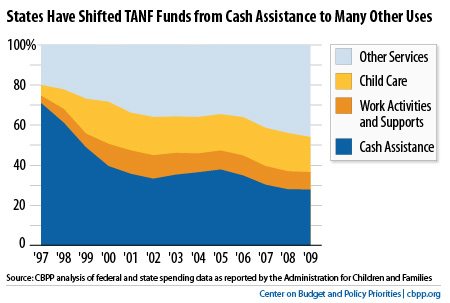 Initially, states used TANF funds to boost welfare-reform-related services such as child care for working parents. But over time, a higher share of TANF dollars have been shifted into other services such as child welfare. A key question for nonprofit human service agencies: At a time of high unemployment, when there are more families who just need cash, does the new service-oriented funding mix represent a mismatch of resources to needs? And if so, how are agencies coping?

What do you see out there on the front lines? How well is TANF working in this weak economy?—Chris Hartman