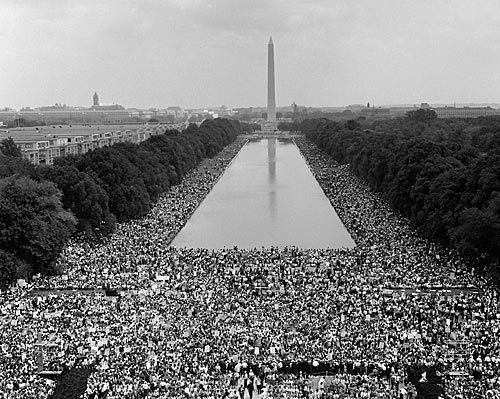 The March for Jobs and Freedom in 1963 had a very strong emphasis on jobs and economic equality.

As recounted by John Branston at the Memphis CityBeat, the marchers demanded “a massive federal program to train and place all unemployed workers—Negro and white—on meaningful and dignified jobs at decent wages.” They also demanded a “a national minimum wage act that will give all Americans a decent standard of living. (Government surveys show that anything less than $2 an hour fails to do this.)” They demanded an extension of the Fair Labor Standards Act to include all areas of employment that were presently excluded, and a federal Fair Employment Practices Act that would bar discrimination by federal, state, and municipal governments, and by employers, contractors, employment agencies, and trade unions.

How far have we come in the past fifty years? Take this brief quiz and see for yourself.

1) Was the unemployment rate in 1963 higher or lower than it is today?

ANSWER: d) it is about the same

3) Who does the Bureau of Labor Statistics currently count as unemployed?

ANSWER: a) unemployed people actively looking for work in the prior 4 weeks

The official unemployment rate of 7.4 percent in July 2013 does not include those underemployed people who work part-time and who may want full-time jobs, or those who are not actively looking for work.

Because of the growth in the population, and more women working, the labor force has grown over time. Six million Americans were officially unemployed in 1963. Fifty years later, in July 2013, 11.5 million people were counted as being officially unemployed. So we have nearly twice as many people unemployed now as we did in 1963.

In July 2013, there were also 14.8 million other people who are considered to be among the “hidden unemployed.” 8.2 million people worked part-time because they couldn’t find a full-time job. Another 6.6 million people wanted jobs but were not actively looking, of which about 2.4 million had searched for work in the prior 12 months, and were available for work during the reference week.

Taken together, 26.3 million people, or 16.2 percent of the labor force need jobs. Currently, there are approximately seven job seekers for every available opening.

(For purposes of calculating the unemployment rate, the approximately 2.3 million Americans in prison are not counted, even though they will likely need jobs if and when they get out of jail.)

6) After adjusting for inflation, how much would the 1963 minimum wage of $1.15 an hour be worth in today’s dollars?

After adjusting for inflation, R.J. Eskow computes that 1963’s minimum wage would be $8.37 in contemporary dollars—and that’s higher than the current federal minimum wage of $7.25.

7) At the 1963 March for Jobs and Freedom, the marchers demanded an increase of the minimum wage to $2.00 an hour. If they had achieved this increase, how much would that $2.00 minimum wage be worth in today’s dollars?

At its highest point (in inflation-adjusted dollars) the minimum wage was worth $9.44 in 1968. It’s 23 percent lower now. And despite those who claim that a higher minimum wage leads to greater unemployment, the official unemployment figure in August of 1968 was 3.5 percent—less than half the current rate of 7.4 percent.

Dean Baker and Will Kimball, writing for the Center for Economic and Policy Research, demonstrate in their piece “The Minimum Wage and Economic Growth” that the minimum wage has fallen behind as worker productivity increased. Had it kept pace, the minimum wage in 2012 dollars would be $16.54 an hour.

In 2011, a full-time, year-round worker would need to earn $11.06 an hour to keep a family of four above the poverty line. More than a third of non-Hispanic black workers—36 percent—don’t earn wages that high.

8) When was the minimum wage for tipped workers last increased?

The minimum wage for tipped workers has not been increased for 22 years. Experts estimate that about 14.5 percent of food service workers live in poverty, including 16.7 percent of waiters.

9) What percentage of the white median income did black households earn in 1968?

10) What percentage of white median income did black households earn in 2010?

12) According to the FLDA, what is the current federal minimum wage for workers who receive tips?

Some states have minimum wage laws specific to tipped employees. When an employee is subject to both the federal and state wage laws, the employee is entitled to the provisions which provides the greater benefits.

13) What types of workers are excluded from the overtime and minimum wage provisions of the Fair Labor Standards Act?

ANSWER: d) all of the above

FLSA, originally enacted in 1938, guarantees most workers a minimum wage for each hour worked. FLSA also provides for overtime pay by requiring that most employees who work more than 40 hours in a workweek be paid one and one-half times the regular rate of pay for each hour over forty hours per week. FLSA further requires employers to comply with recordkeeping requirements, including maintaining payroll records for employees.

Since its enactment, home care workers have been excluded from the overtime and minimum wage provisions of the FLSA. Former Labor Secretary Hilda Solis, working with domestic workers’ advocates, proposed new regulations in 2012 that would undo this “companionship exemption” and apply federal minimum wage and overtime laws to caregivers.

From the foregoing, it is hard to avoid the conclusion that Black people in America live in a permanent, never-ending recession that is not taken seriously by political leaders and economic policymakers. Life is a permanent state of emergency for all American workers who are unemployed, underemployed and underpaid. Further, it seems that workers and communities will need to be highly organized and insistent to secure the modest, highly reasonable economic justice demands made by the civil rights marchers in 1963.

Several weeks before his death in 1968, Dr. Martin Luther King, Jr., told a group of santiation workers in Memphis:

“Now our struggle is for genuine equality, which means economic equality. For we know now that it isn’t enough to integrate lunch counters. What does it profit a man to be able to eat at an integrated lunch counter if he doesn’t have enough money to buy a hamburger?”

With increased spending on the war in Vietnam, less resources were made available for the War on Poverty and public job creation. Government action to create jobs and reduce poverty became a non-priority. Direct government creation programs, such as CETA, ended in 1982 after the election of President Reagan. Today, many conservatives and liberals alike believe that “government can’t create jobs.” Many seem to think the private sector will create all the jobs we need. But with 26 million Americans in search of work, it seems unlikely private market forces will close the gap anytime soon.

Given that our communities have so many unmet needs, it’s time to think about closing America’s other gaping deficits: the deficit of good living wage jobs, and the deficit of underinvestment in infrastructure and public services. If we were meeting America’s needs for roads, bridges, schools, water systems, clean energy, affordable housing, home care, child care and afterschool programs, all of us would be working—and then some.

Chuck Bell is Vice-Chair for the National Jobs for All Coalition, based in Lynbrook, New York. NJFAC is a national organization working to create a new national movement for full employment. NJFAC participated in the 50th Anniversary March for Jobs and Freedom on August 24. With the coalition’s support, Rep. John Conyers (D-MI) has introduced HR 1000, the 21st Century Humphrey-Hawkins Full Employment and Training Act, to provide a living wage job for everyone who wants one. For more info, visitwww.NJFAC.org. We are proud to say thatChuck Bell is also the chair of the NPQ board of directors.

Chuck Bell is Programs Director for Consumer Reports in Yonkers, NY, where he engages in advocacy on digital finance, education debt, and other financial fairness issues. He has been active in state campaigns to protect student loan borrowers in New York, Massachusetts, New Jersey, and California.