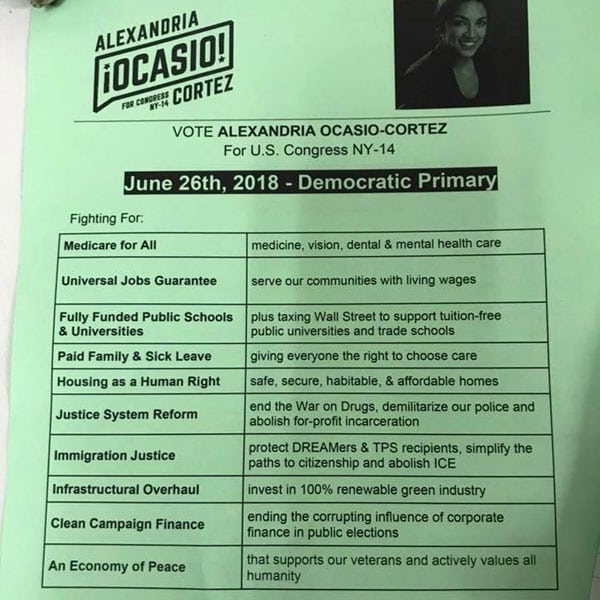 Alexandria Ocasio-Cortez’s victory over incumbent Rep. Joe Crowley for New York’s 14th congressional district Tuesday is being called “the most shocking upset of a rollicking political season,” “the first knockout blow against the establishment wing of the Democratic Party,” and “the political equivalent of an earth-shattering event, the effects of which are going to be felt for years.”

Twenty-eight-year-old Ocasio-Cortez beat the 10-term incumbent, who was seen as a potential successor to Minority Leader Nancy Pelosi, comfortably prevailing with 57.5 percent of the votes. As Splinter’s Paul Blest notes,

Ocasio-Cortez is not just a progressive, or a Bernie Sanders supporter. She is an avowed socialist, recognizing healthcare, housing, jobs, and higher education as human rights which should belong to all of us. She supported abolishing ICE long before congressional Democrats began endorsing it. She ran against Crowley’s support of PROMESA, the undemocratic board running Puerto Rico’s finances that has forced the island into crippling austerity.

Ocasio-Cortez’s socialism is one that’s tailor-made for these times.

Ocasio-Cortez has been personally impacted by Crowley’s actions. As she tweeted to Crowley, “My grandfather died in the storm. Your acts shut down schools and starved public services when we need them most.”

She told the Washington Post that she decided to challenge Crowley because “he was a ‘corporate Democrat,’ who received more money from corporate PACs than from local donors—and from the developers who were driving up housing costs. He had voted to create the Department of Homeland Security. He’d voted for the war in Iraq. He’d voted for PROMESA, the bill that created a hated bankruptcy board to handle Puerto Rico’s debt.”

Many are saying that, in a time when many Democrats don’t know what to stand for or how to move the country forward, Ocasio-Cortez is showing the way.

Crowley outspent Ocasio-Cortez by a margin of greater than seven-to-one, spending an estimated $1.5 million to her $194,763. Ocasio-Cortez won by running to the far left; engaging the left’s “natural constituencies—workers, people of color, immigrants, and anyone who has been threatened by this administration—and offering them not just a bandage to temporarily stop the bleeding of the Trump assault, but an idea of how to make this ailing country well”; and running a superior ground game, which she was prepared for and had a network in as an organizer. In fact, she was invited to run by Brand New Congress.

In addition to the movements she is part of, Ocasio-Cortez garnered support from national progressive groups, including MoveOn, Democracy for America, Our Revolution, Justice Democrats, and Democratic Socialists of America, though some of these came in the last few weeks of her campaign.

Interestingly, EMILY’s List­—the “EMILY” part stands for “early money is like yeast”—did not endorse Ocasio-Cortez. Though EMILY’s List President Stephanie Schriock told Time, “We’ve been practicing 33 years for this moment,” some are noting the group’s “conspicuous silence” on many high-profile primaries challenging male establishment candidates, even though that is its purpose. Even the Working Families Party, “which has helped primary challengers and insurgents across the state,” failed to endorse Ocasio-Cortez. They went for Crowley.

Ocasio-Cortez says the difference between her and Crowley is how they are powered: “This race is about people versus money. We’ve got the people. They’ve got the money.”

In her victory speech, she said, “This is not an end, this is the beginning,” and urged US voters to elect other like-minded candidates and send the message “that it’s not OK to put donors before your community.” One could add, assumptions about who is a viable candidate.

In the weeks before the election, she said, “The only time we create any kind of substantive change is when we reach out to a disaffected electorate and inspire and motivate them to vote.” It would seem the field is ripe.—Cyndi Suarez