The Workforce Innovation and Opportunity Act: Unprecedented Opportunities for Philanthropists 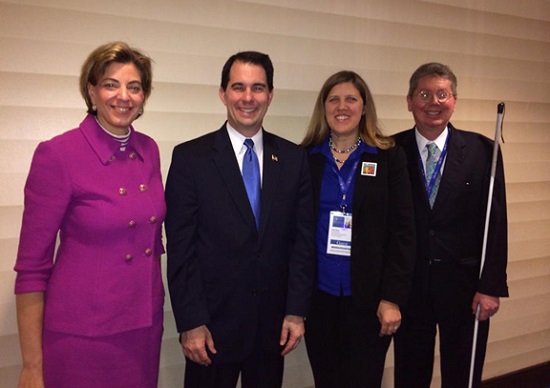 This Voices from the Field article by Jennifer Laszlo Mizrahi of the Mizrahi Family Charitable Fund discusses the remarkable leverage points for change that exist at the state level as they seek to implement the WOIA. She wants other philanthropists to see this moment as an extraordinary opportunity.

My husband and I started our fund more than 15 years ago. We have a lot to be grateful for, and good reason to give back. But how can we have the greatest philanthropic impact for our charitable investments? How can we leave a better world for our children, and their future children?

We are data-driven and performance-metrics people. Naturally, we want to maximize our philanthropic impact. I therefore enthusiastically took executive training courses at Harvard in public policy and on performance metrics for nonprofits. I spent countless hours interviewing leaders, experts, and frontline professionals. I have taken the time to read thousands of pages of key material. (Not to mention I’ve worked in policy, strategy and politics for decades.) Then, in 2012, I found an amazing opportunity where we could get exceptional returns on our philanthropic investments in terms of public good. That is where I focus most of my time and our largest philanthropic investments today.

As I was searching for the best way to make the biggest positive difference, the governor of Delaware, Jack Markell, became the chair of the National Governors Association. A great advantage of that job is that the chair can pick one issue where they feel that they can make the most impact during their tenure. All of the governors from around the country then focus collectively on that issue for a full year. As it happens, both Governor Markell and I discovered the same issue from different vantage points around the same time—employment of people with disabilities. It is an urgent issue that has been under the radar for decades. Now, there are proven best practices that, if broadly replicated, can be put into use to improve millions of lives.

Many years ago, Governor Markell and I served on a young leadership board together. However, we had not been in touch for years. Now, drawn to the same issues, we are working closely together to roll out profound changes that can dramatically improve the landscape for millions of working age people with disabilities who want to work.

Why? Part of it is stigma. However, a big part is that literally billions of dollars of public investments have been poured down the toilet by continued support of failed programs. Indeed, 95 percent of people with disabilities who have gone on government benefits never got off them.

Thankfully, inspired by the work of Gov. Jack Markell and bipartisan leaders in Congress, there now can be progress because of new laws that give states and the workforce system the flexibility to spend their workforce development dollars on things that work. Sixteen failed federal government programs were killed, and thanks to the Workforce Innovation and Opportunity Act (WIOA), states will largely control $17 billion dollars a year in federal funding to enable people with barriers to work to become gainfully employed.

In addition to WIOA, the new ABLE Act allows people who have or acquire a disability by age 26 to keep some savings without losing much-needed health benefits. Moreover, the new Section 503 of the Rehabilitation Act encourages federal contractors to be inclusive employers. It turns out that state governments will now have tremendous powers for positive good.

So where does a foundation come into all this? Under WIOA, states can blend and braid billions in funding from TANF, SNAP, Medicare, and Medicaid to enable people with disabilities to work. However, it is not so simple. They need to find and embrace change and best practices—far easier said than done. They have billions to spend, but they need help to spend it on things that actually will work well. If state officials don’t understand how to blend and braid funding, as well as how to break out of silos by embracing best practices, we will see the same failures of the past.

In the last 20 months, with the important help of Gov. Markell, I have met one-on-one with forty governors to discuss employment for people with disabilities.  Unlike Washington politicians who are mired in partisan bickering and gridlock, most governors are powerful people who can really get things done quickly. Our team has met with several governors multiple times. Indeed, our nation is rich in governors who want to make a positive difference and who are in a position to do so—if they have the right partners from philanthropy.

Our team has formed a coalition with key disability groups. We have met with staff members from governor’s teams, workforce boards, and agencies from all 50 states.

Following the lead of Governor Markell and his team in Delaware, the governors of Washington, Colorado, and Minnesota are working to have their states become model employers of people with disabilities. We created a toolkit to help states understand the data from their states so that their performance dashboards would have what they need. Previously, states, along with workforce boards and agencies, looked largely at unemployment numbers alone. This is a major mistake, as most of the 14 million working-age Americans with disabilities who are outside of the workforce aren’t actively looking for work and thus were missing from unemployment numbers. However, polls show that most people with disabilities want to work. People with disabilities are sick of being pitied. They want to be seen and valued for the abilities and talents that they have. They want the friendships, dignity, independence, improved health, respect, and financial success that work brings.

Under Section 102 of the new WIOA law, each state must make a new “unified plan” on employment for people with disabilities and others with barriers to work by March of 2016. We have very little time. In each state, there are key gaps that can and must be filled by philanthropists to make this all work. Team- and trust-building, as silos are broken down to create new and better systems, will not be easy. Nor will it come free. These philanthropists will need to learn best practices—and government funds won’t pay for that.

The private sector is a key partner. Companies need real talent and people with disabilities can deliver them. Employers, including Walgreens, E.Y., AMC, Walmart, SAP, Pepsi, and others, have shown that employees with disabilities are loyal, successful, and help them make more money. People with disabilities bring unique characteristics and talents to workplaces, which benefit employers and organizations. When we find the right jobs for the right people, it can and does increase the bottom line for companies.

There is not a single country on earth where people with disabilities don’t face stigmas, challenges, and massive gaps in workforce participation. But there are pockets of great progress. For example, in North and South Dakota, along with Montgomery County, Maryland, there are relatively great employment outcomes for people with disabilities. Wonderful work is being done by the governors of Delaware, Wisconsin, Iowa, South Dakota, and other states. We are seeing real excitement from the governors of Washington, Colorado, Mississippi, Utah and other states, too.

In some states, however, the governors were very excited by these issues but got bogged down. For Governor Nixon of Missouri, for example, the need to focus on Ferguson slowed the process down. Governor Christie was very enthusiastic about this work and instantly made it bipartisan by bringing in the Democratic Speaker of the N.J. Senate. However, bridge issues then took key staffers away from the project, as they had to “clean up” challenges. However, I suspect we will have exciting opportunities in New Jersey soon. All this together makes me very optimistic that people with disabilities and their employers in many states will see great progress—if the philanthropic sector jumps in to fill key gaps.

One in five Americans has a disability. This means that you are already working with people with disabilities. So here is an unprecedented opportunity to have major breakthroughs. Moreover, you can maximize your investments by joining forces with the billions already designated by the government—with no lobbying at all.

If you want your philanthropy to help people who are poor, marginalized, isolated and face discrimination, this is the place to be. With new laws and funding, plus the interest of employers and governors, now is the time for transformative public-private-philanthropic partnerships. People with disabilities deserve to be able to work just like anyone else. The time for philanthropists to jump in on this is now.

Jennifer Laszlo Mizrahi is the co-founder/director of the Mizrahi Family Charitable Fund and president of RespectAbilityUSA.org, a nonprofit working to enable people with disabilities to achieve the American dream.