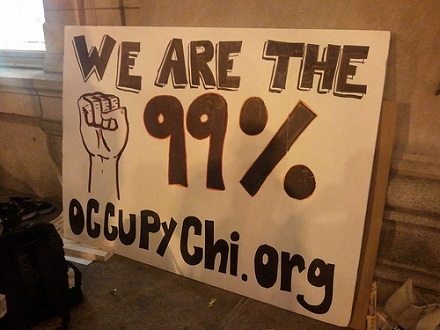 Occupy movement demonstrators are gathering in Chicago to stage protests at this weekend’s North Atlantic Treaty Organization (NATO) summit. USA TODAY reports that “thousands of police officers — including reinforcements from Philadelphia, Milwaukee and Charlotte — will be deployed; a no-fly zone will be enforced; and some commuter trains will be canceled. Businesses are boarding up windows; Lake Shore Drive and the Art Institute will close, and the Postal Service warns of delivery delays.”

The NATO summit will focus on three key themes: NATO’s “commitment to Afghanistan through transition and beyond,” “ensuring the Alliance has the capabilities it needs to defend its population and territory and to deal with challenges of the 21st century,” and “strengthening NATO’s network of partners across the globe.” Outside the summit, the Occupy demonstrators will also focus on some key themes, including access to health care and governmental funding of the military-industrial complex during a time of declining funding for services to communities hit by the recession.

On Saturday, Occupy demonstrators are planning to march to the home of Chicago Mayor Rahm Emmanuel to ask his neighbors where they can find mental health care in the wake of several clinic closings. On Sunday, a march organized by Iraq and Afghanistan war veterans will feature veterans handing over their service medals to NATO generals in order to demonstrate their belief that the “Global War on Terror” is misguided. On Monday, protesters plan to take to the streets of Chicago to “shut down” Boeing, which is headquartered in Chicago and which the Occupy-affiliated Chicago Spring says “plays a huge role in NATO’s war machine.”

Predictions of the numbers likely to be involved vary widely but city officials are estimating that a rally today where nurses will demand a Robin Hood tax be placed on financial transactions may grow to as many as 5,000. The nurses estimated 2,000. –Mike Keefe-Feldman