Title II Net Neutrality Passes at FCC: A Battle Won, but the War’s Not Over 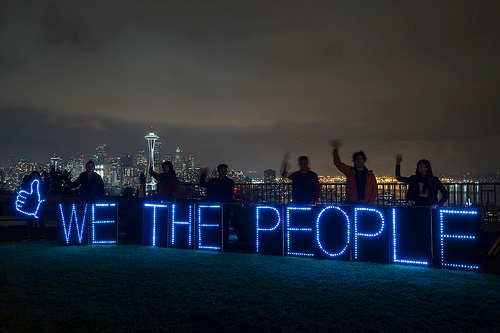 After nearly a year of sustained buildup, the Federal Communications Commission’s ruling yesterday enshrines a new, stronger policy on net neutrality founded on the declaration that broadband Internet service is a telecommunications service under Title II of the Communications Act.

The proposal was introduced at yesterday’s FCC meeting by Julie Veach, chief of the FCC’s Wireline Competition Bureau, who said it “would set forth clear, sustainable, enforceable rules to preserve and protect the open Internet as a place for innovation and free expression.” As detailed in the FCC’s fact sheet, three “bright line” rules would ban practices with the potential to harm the Open Internet:

The order mandates greater transparency than was available under the 2010 Open Internet Order when it comes to the “reasonable network management” clause and “managed services,” both of which give ISPs leeway to take the actions necessary to provide their offerings while still following these new rules. It also sets up the FCC as enforcement authority over some complaints about interconnection, a controversial issue regarding the practice of ISPs charging websites (like Netflix, for example) to allow customers access to specific content. It’s known that last-minute changes were made at the suggestion of representatives of Google, Free Press, and the Open Technology Institute at New America that altered some of the proposal’s language on the subject.

The new proposal explicitly doesn’t address issues like rate regulation, bundling of services, and last-mile costs, and is vague on issues like zero rating, which is when phone or cable companies exclude certain apps or services from a customer’s monthly data cap. Making certain products effectively free and others not is clearly against the spirit of net neutrality, but it’s unclear what will be done about it. (Republican commissioners Michael O’Rielly and Ajit Pai asked that the FCC “immediately release the 332-page Internet regulation plan publicly and allow the American people a reasonable period of not less than 30 days to carefully study it.” That request was denied. The document should be available in a few weeks.)

Yesterday’s vote passed 3-2 and went along partisan lines, with O’Rielly and Pai dissenting and Democratic commissioners Mignon Clyburn and Jessica Rosenwercel in favor. All involved were passionate in defense of their positions. Clyburn made stirring allusions to the Founding Fathers and the Civil Rights movement. Rosenwercel called the Internet “our printing press” and “our town square.” Pai spoke ominously about the potential for these new rules to stifle innovation and future development, and O’Rielly denied there was more than anecdotal evidence that net neutrality was anything at all to worry about. There was even a recorded statement from Sir Tim Berners-Lee, recognized as the inventor of the World Wide Web.

Chairman Wheeler, as would be expected, had the last word, giving great accolades to the four million Americans who responded to requests for commentary, weighed in through various forums and advocacy groups, and made their opinions known:

“Let me start the process towards that vote by thanking the nearly four million people who participated in this proceeding. You told us you were concerned about the future of the Internet, and your participation has made this the most open proceeding in FCC history. Not all of you agreed with each other and not all of you agreed with the action that we are going to take today. But you made our process, and thus our decision, stronger. We listened and we learned. I believe that’s what congress intended when they established the rules by which this agency operates.

“Those four million comments also illustrate the importance of an open and unfettered network and the role it plays as a core of free expression and democratic principles. While some other countries try to control the Internet, the action that we take today is an irrefutable reflection of the principle that no one, whether government or corporate, should control free and open access to the Internet.

Slightly less glamorous and correspondingly less controversial was the passing vote to override state laws, like those in Tennessee and North Carolina, which prohibit municipalities from setting up their own local high-speed broadband networks. (President Obama was a strong advocate here, having given several speeches on the subject back in January.) This, too, split along party lines, 3-2, with Wheeler and the two Democratic commissioners calling it a move to clear away “thickets of red tape” preventing customers in rural or underserved areas from getting high-speed Internet access and O’Rielly aghast at government providing services in competition with private actors, comparing it to nationalized offerings from Venezuela, Cuba, and Russia.

As exciting as this development is, and as hard as groups like Fight for the Future have worked for it, this won’t go forward without a lot of legal impediments. Lawsuits were ready to be filed before the gavel struck, and the court of public opinion is primed for providers and legislators to try and undo what has been done. (In a fantastic bit of pique, Verizon published its response in opposition to the decision in Morse code.) Several Congressional committees are investigating whether President Obama exercised undue influence on the Commission’s decision, leading David Segal, executive director of Demand Progress, a group that supports net neutrality, to say:

“Popular victories like today’s are so unusual that three Congressional committees are investigating how this happened. If the net neutrality effort had followed the usual playbook, if Comcast, Verizon, and AT&T had defeated the American people, nobody would be wondering why.”

There will surely be more responses in the thirty days before these measures would take effect (regardless of any obstacles put in their way), and NPQ will doubtlessly continue to cover net neutrality and its aftershocks. In the meanwhile, here’s a moment to reflect on what can be seen as a true victory for online activists and nonprofit advocates alike.—Jason Schneiderman