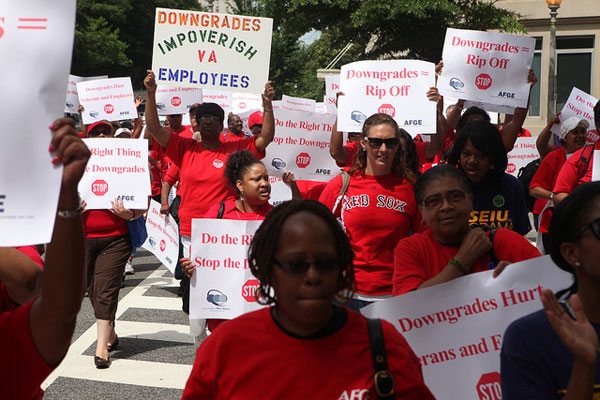 March 1, 2018; The Conversation, CNN Money, and The Atlantic

Predicting the outcomes of Supreme Court cases can be a risky venture, what with four liberal and four conservative justices and one “swing” vote as the determining factor. With the case of Janus vs. American Federation of State, County, and Municipal Employees, heard in the Supreme Court last week, the possibility exists of reversing 40 years of precedent set in the case of Abood v. Detroit Board of Education, which allows public-employee unions to collect “agency fees” for the cost of representing non-member employees in collective bargaining.

It was clear that the “swing” vote would be the newest member of the court, Justice Gorsuch, who remained silent throughout the hearing. This case, however, brings some troubling issues before the court, as to who will benefit and who will pay the price for allowing workers to “opt out” of agency fees for unions whose wage agreements cover all of them, as set in Abood. As we often like to say, it’s complicated. And in this case, we may want to add, it’s also political.

What’s at stake in Janus is whether unions can charge agency fees to workers who benefit from union negotiations but choose not to belong to the union. Currently, 23 states allow unions to charge “agency fees” to all workers covered by their contracts. (Only members pay full dues, which can be used for political action as well.) In this case, Janus, an Illinois public employee, says that this is a violation of his free speech rights and he should not have to pay any fees, as they are inherently political. Should the justices rule in Janus’ favor, workers will only pay dues on a voluntary basis. Public sector unions are stronger than other unions—unions represent 37.9 percent of the workers in the public sector, compared with the 7.3 percent of workers unions represent in private industry—and should this be the ruling, it would be a blow to union membership and the impact would be felt in many sectors.

In arguing the case, the lawyers for Janus were asked by Justice Sotomayor for data on unionization in the corporate and private sectors. US Solicitor General Noel Francisco, representing Janus, could not produce that data. The focus was then only on the cost of union contract negotiations, in the context of fees collected from non-union employees forced to pay them. Countering this, “David Franklin, who argued for the state of Illinois in defense of its ‘agency fee’ law, told the Court that the attorney for the Right-to-Work fund had been wrong to focus on the cost of contract negotiations.”

Unions also must represent workers in grievance proceedings, he noted, and that costs money: “We don’t know what percentage of the union’s activities are wrapped up with grievances.” In fact, he said, grievance-representation costs “can be three times, six times, seven times as much…[as] the line for collective bargaining. So to decide this case in an evidentiary vacuum on the basis of assumptions about how that speech breaks down or how those expenses break down would in our view be irresponsible.”

Will there be winners and losers in this case beyond the union supports and those who would like to see unions fail? In an insightful article in The Conversation, Raymond Hogler, Professor of Management at Colorado State University, states, “This is another skirmish in the culture wars that pit individual rights against collective ones. If groups such as unions lose the ability to raise the funds necessary for collective action, I believe workers will be worse off, and inequality will rise.”

The value of unions, particularly for low-wage workers, goes beyond wages to include benefits such as health care and pensions. It is these factors, particularly for public sector unions, that chafe at those who see tax dollars going into the pockets of unions and thus seek their demise.

For those of us in the nonprofit sector, does this case, yet to be decided, carry weight? It could. A new working paper by Rutgers University professor William Rodgers III found that right-to-work laws hit the earnings of black and Latino workers the hardest because they are disproportionately represented in unions. Black women, in particular, make up 17.7 percent of public sector employment, and thus would suffer most. As CNN Money put it:

Overall, median weekly earnings for unionized public sector workers are 19.5 percent higher than non-unionized public sector workers, according to the Bureau of Labor Statistics. That may stem from differences in factors like age and gender across unionized and non-unionized workers, but a 2004 study by Dartmouth economist David Blanchflower found that the wage premium holds up when correcting for those and other factors.

In addition, public sector workers’ total compensation is more weighted toward retirement and health care benefits. For 2011, the Bureau of Labor Statistics found that unionized state and local government employees cost 35.7 percent more per hour worked than non-union employees, when all benefits were included.

Perhaps there is something to the statement of AFSCME President Lee Saunders, who said, “We’re lifting everyone’s boats when we’re negotiating collectively.” And isn’t that, after all, the nonprofit sector’s central purpose?—Carole Levine