Vital Records: Births and Deaths in the Nonprofit Sector

Editors’ note: This article is featured in NPQ’s new, winter 2014 edition, “Births and Deaths in the Nonprofit Sector.”

Everyone agrees that the number of registered nonprofits at any given time is a very rough—bordering on meaningless—proxy for the number of nonprofits that exist. But these are the figures advanced whenever anyone attempts to describe the parameters of the sector. This article outlines the numbers and some of the issues and questions that they raise.

Between December 2004 and September 2014, there were 1,904,769 IRS-approved tax-exempt organizations that appeared on the IRS Exempt Organizations Master File (EOMF) for at least one month. Yet, by September 2014, there were only 1,459,813 organizations that the IRS still believed were viable. For various reasons, any analysis of the ebbs and flows in the numbers and types of nonprofits that thrived and perished during this period is inherently flawed, but the analysis here presents a rough sketch of what happened during the period.

Using the EOMF, we can get some idea of the births and deaths of organizations from 2005 through 2014. One of the difficulties in pinning this down with precision jumps out after a quick look at table 1.1 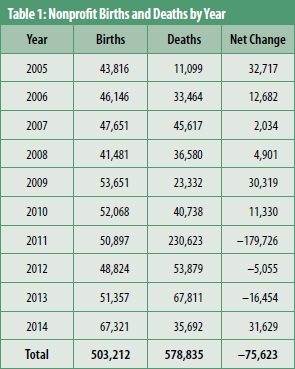 The first round of these automatic revocations began in June 2011. Based on the anomalous number of deaths for that year (and, to a lesser degree, in 2012 and 2013), the actual number of deaths in the years preceding 2011 are understated. For example, 154,214 of the organizations appearing on the December 2004 EOMF would have qualified for automatic revocation had the law been in effect at that time, but they did not lose their tax-exempt status until June 2011. It is also worth noting in passing that death is a simpler but somewhat misleading way of describing the loss of taxexempt status. One of these “dead” organizations is happily operating as a public charity seven miles from where I sit writing this, ignorant of the fact that it has been doing so illegally since June 2011. I suspect that there are thousands of small, volunteer- only organizations in similar circumstances.

The Demographics by Field

In general, there appears to be no trend suggesting that specific program types of organizations are waxing or waning. For the most part, organization types were born and died in proportion to their overall representation in the EOMF (see table 2). 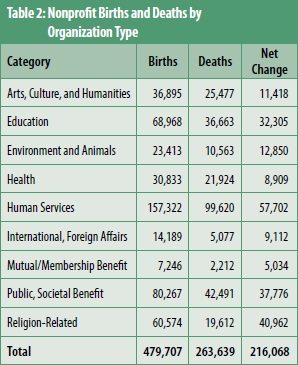 The Demographics by Size of Assets 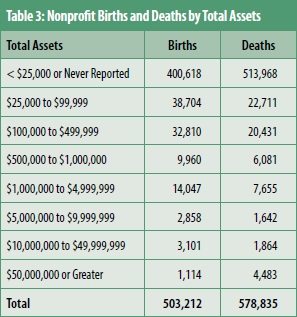 Upon further investigation, we found what you might expect—that the disproportionate number of organizational deaths among mega-organizations were rarely deaths but rather morphings. For instance, the Jamie and Steve Tisch Foundation came apart when the founders underwent a divorce. This death resulted in two births: the Jamie Tisch Foundation and the Steve Tisch Foundation. Another interesting example is Oxford University Press, Inc., which reported net assets of $93,204,848 on its 2011 Form 990. It was allowed to transition to become Oxford University Press, LLC, in Delaware, and become a “disregarded entity” of Oxford University, itself a 501(c)(3)—which essentially means that for tax purposes it will be treated as part of the university. And so it goes—these larger nonprofits do not die at all but rather merge, split, or otherwise change form. This provides just a small window into the fallacy of using the numbers without plenty of caveats.

When speaking of the age of nonprofits at death, the EOMF provides us with only the proxy of the IRS ruling year. In most cases, this will track the founding year fairly closely, but there can be some odd exceptions. For example, the American Diabetes Association (ADA), which has been around since 1940, received a new IRS ruling in 1992 because of changes to its corporate structure. So, for the purposes of talking about age using the EOMF, we have no choice but to treat the ADA as if it were twenty-two years old. This kind of situation is unusual, though, and with the hundreds of thousands of organizations in this analysis, it is unlikely to change the numbers significantly.

The most likely age of organization death is between six and fifteen years (see figure 1). That decade accounted for 31 percent of all deaths. The most “dangerous” age was nine, with 18,955 deaths, about 6 percent more than age ten, the second-highest age for deaths. 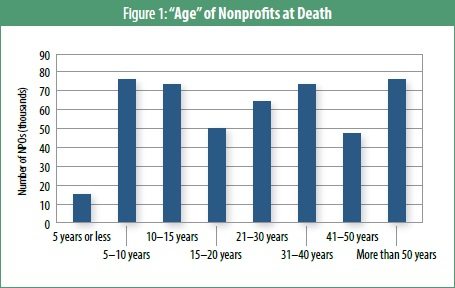 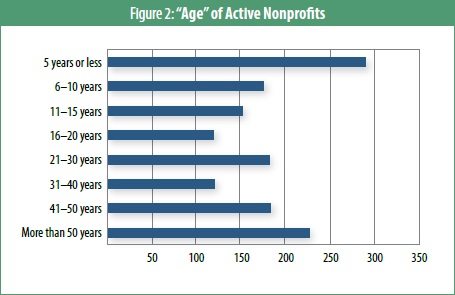 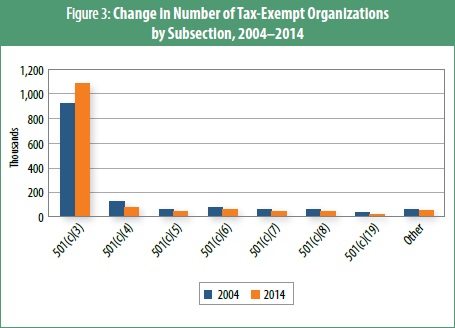 In light of this, one thing that bears close attention is the advent of the Form 1023-EZ. The purpose of this new form is to make it easier for small organizations to receive tax-exempt status as public charities. Although it is much too early to come to a definitive conclusion about the impact this new form will have, consider this: of the 67,321 organizations created in 2014 through the end of August, 28,807 (43 percent) received their tax-exempt status in the two months since it became possible to file Form 1023-EZ, and 62 percent fit the profile of organizations that would be eligible to use that form rather than the full Form 1023.

Readers should use these numbers at their own risk, and only to provide the most general and fuzzy estimates of the parameters of the sector. Although automatic revocations mean that, going forward, the EOMF will give us a fairly accurate understanding of the numbers and types of organizations that are active and have formally applied for and received tax-exempt status, this leaves much of the sector unaccounted for. For instance, the Association of Statisticians of American Religious Bodies reported 344,894 religious congregations in its 2010 census. A vast majority of these congregations do not apply for tax-exempt status, and we know very little about their birth and death patterns. The IRS does not release information on how many and what types of organizations file one of the Form 990 series returns on a regular basis without ever actually applying for tax-exempt status—only organizations operating under IRC sections 501(c)(3), 501(c)(9), or 501(c)(17) are compelled to formally apply. I can find no reliable numbers on how many of these so-called “self-declarers” are currently operating. Likewise, as I have suggested above, there are probably many small organizations, important in their communities if not in the grand scheme of things, that operate as if the IRS did not exist.

Chuck McLean is vice president of research at GuideStar, where he produces the annual GuideStar Compensation Report, an analysis of the executive compensation of thousands of nonprofits throughout the country.