People all over the country will cast their votes today, but one group of eligible voters faces significant barriers that may prevent them from participating in the election process. Unintentional obstacles at a number of polling locations can impede the ability of people with disabilities to vote.

For instance, in Washington, D.C., J.O. Wilson Elementary School served as a polling location for the primary election. Despite the presence of a ramp, many of the building’s entrances are inaccessible, as voter and wheelchair user Ian Watlington points out: “Anyone who goes up the ramp will soon find there is no electric opening. The accessible entrance opens outward, so I’m at the top of the ramp and I’m opening the door, and then it hits me. There’s a bar at the center of the door and it’s too narrow of an entryway.”

It has been 26 years since the implementation of the Americans with Disabilities Act. As a nation, we have made great progress in ensuring that our peers with varying ability levels can participate in their communities. And yet, in a time when we have cars that can drive themselves, why can’t we be thoughtful enough to anticipate and figure out how to make all polling locations accessible? According to Watlington, “It’s absolutely frustrating as a person with a disability, because this is 2016.”

Michelle Bishop, Voting Rights Specialist with the National Disability Rights Network, points out this issue goes beyond frustration. “If your polling place is somewhere that you can’t even get in, not only do you sometimes feel like your vote may not matter, but it also feels like people don’t want you to vote, or don’t care if you can.” With recent census reports indicating that 35.4 million Americans with disabilities will be eligible to vote in this year’s election, our nation cannot afford to impede or discourage voting among this population.

The U.S. Department of Justice released a document that spells out all of the federal laws that protect the voting rights of people with disabilities. Along the way, it states clearly why this issue is so important. “Voting is one of our nation’s most fundamental rights and a hallmark of our democracy. Yet for too long, many people with disabilities have been excluded from this core aspect of citizenship.”

Unfortunately, this problem has no easy fix, as polling location’s challenges are unique. As Bishop indicates, “In rural areas, we see even more interesting locations used as polling places. I’ve seen a barn on a grassy hillside with no path leading up to it, because that’s what is available in that area.”

Terrica Jennings, the ADA coordinator with the D.C. Board of Elections, points out that densely packed cities have their own issues with finding polling places. “You don’t necessarily have facilities that are sprawling, that have huge parking lots, that have all the features that would just make it really easy for any voter to get into.”

Fortunately, a number of states have taken steps to ensure that their citizens with disabilities are able to vote. For instance, Connecticut’s electronic tablet system is available in every town and works with many assistive technology devices. An individual completes their ballot via touchscreen and a printer marks a corresponding paper ballot. That paper ballot is then scanned and counted just as any other ballot would be. Election offices across the country have started training poll workers on how to handle accessibility issues for people with disabilities. Curbside voting is now available in many states, so people with disabilities do not have to attempt to enter what ultimately becomes an inaccessible polling place.

While finding an accessible polling place, or even one with curbside voting, will depend on where an individual lives, sending in an absentee ballot is always an option. This is no solution, though; it’s merely a Band-Aid for those with no other voting option right now. Experts suggest checking out your polling location early to make sure it is physically accessible and speaking with the local election office to determine what accommodations are available on Election Day. Importantly, let the election office know if you discover your local polling place is not accessible.—Sheela Nimishakavi 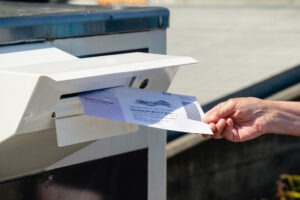