Was Mayor Flashing “Gang Sign” or Was KSTP Having a Slow News Day? 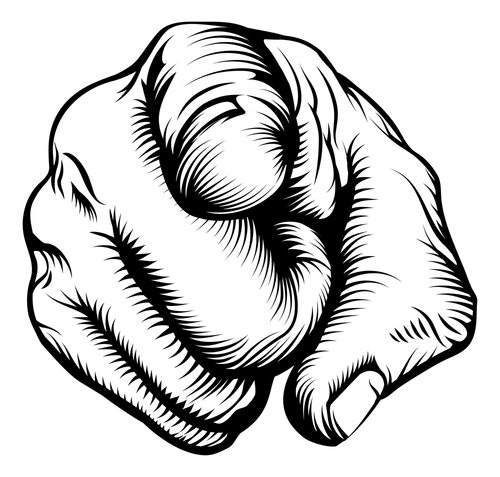 The silly season of electoral politics is not quite over in Minneapolis. Take the case, as reported by KSTP Eye Witness News, of the recently accused gangbanger, Mayor Betty Hodges. During a neighborhood get-out-the-vote effort prior to last week’s midterm election, Hodges posed for a photo with a young man who was working as a canvasser. In the photo, Mayor Hodges is pointing at the young man and he is pointing at her. It turns out the young man is on probation for drug possession and selling, as well as possession of a firearm. If her being in the same photo was not bad enough, the pointing gesture—gasp—was actually a gang sign, according to KSTP.

But the photo was actually taken while a video was being recorded, and if you watch it—at least until the 30 second mark—you will see how completely absurd the issue becomes.

The photo was brought to the attention of KSTP by unspecified law enforcement after it was spotted on the young man’s Facebook page. The intrepid KSTP reporter found a retired Minneapolis police officer, who assessed the photo as “disappointing, because it puts police officers at risk.” The KSTP reporter also interviewed the head of the Minneapolis police union, who similarly chastised the mayor, saying, “When you have the mayor of a major city, with a known criminal, throwing up gang signs, that’s terrible.”

What neither the KSTP reporter nor the news team could seem to uncover, however, was that this may have been nothing more than a move in an ongoing political game between the mayor and the police department. Mayor Hodges has recently been calling for tougher actions against police misconduct.

According to TalkingPoints Memo:

“The television station also neglected to mention that Minneapolis Police Chief Janee Harteau was there with Hodges and at that very moment, off camera. In a tweet that has apparently since been deleted, the Minneapolis Police Department posted a photo on Saturday of Harteau at the scene next to Hodges and the volunteer.”

Here’s a screengrab of the tweet, posted by Daily Kos: 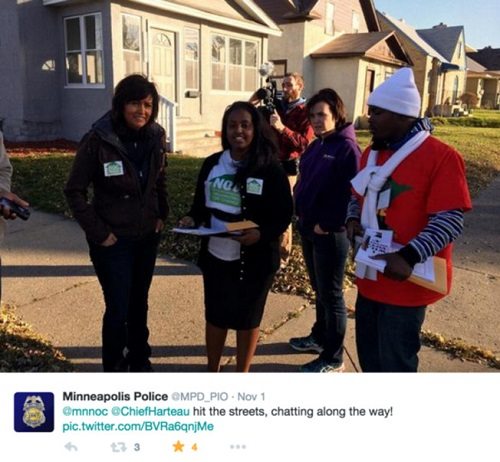 As in all such games, though, the real losers are often the people caught in the middle—like Navell Gordon, the young black man in the photo with the mayor, and the nonprofit that employs him. Mr. Gordon, 22, does have a criminal history to be sure, but he is also trying to turn his life around. For the past two years, he had been employed as a canvasser for Neighborhoods Organizing for Change (NOC). His three-year probation ends in June 2015 and he has not had a single violation. The executive director of NOC, Anthony Newby, acknowledging the potential damage to his organization, described the report as a “slanderous hit piece.”

While it is not clear if Mr. Gordon was convicted of his crimes as a juvenile, Hennepin County has a Juvenile Detention Alternatives Initiative (JDAI) that seeks to redirect young offenders from detention and other forms of incarceration. When young men like Mr. Gordon try to turn their lives around and they get an assist from nonprofits like NOC, a civil society needs to applaud both, not make the way more difficult for either.

The response to the Eyewitness News report was immediate, strong, and overwhelmingly negative toward KSTP. On social media, it was dubbed “Pointergate” as people took aim at the story. At #pointergate, hundreds of Tweets and photos have been posted that show a wide variety of famous people, including New Jersey governor Chris Christie, former presidents Reagan and Clinton, Oprah Winfrey, Darth Vader and Captain Kirk, and even a painting of God in the Sistine Chapel, pointing in the same manner as Mr. Gordon and Mayor Hodges.

By the way, what does a pointed finger, like the one Mayor Hodges and Mr. Gordon are “flashing,” really mean? According to a retired Minneapolis police officer and the head of the police union—but not the police department, which had no comment—it is a gang sign. According to the leader of the Minneapolis chapter of MADDADS, a national organization that works against inner-city violence, it is not. According to the American Sign Language University, it is called “indexing,” aka “pointing,” to indicate a person is merely present.—Tom Klaus