What the Nonprofit Sector Can Learn from the Occupy Movement? Direct Democracy as Governance 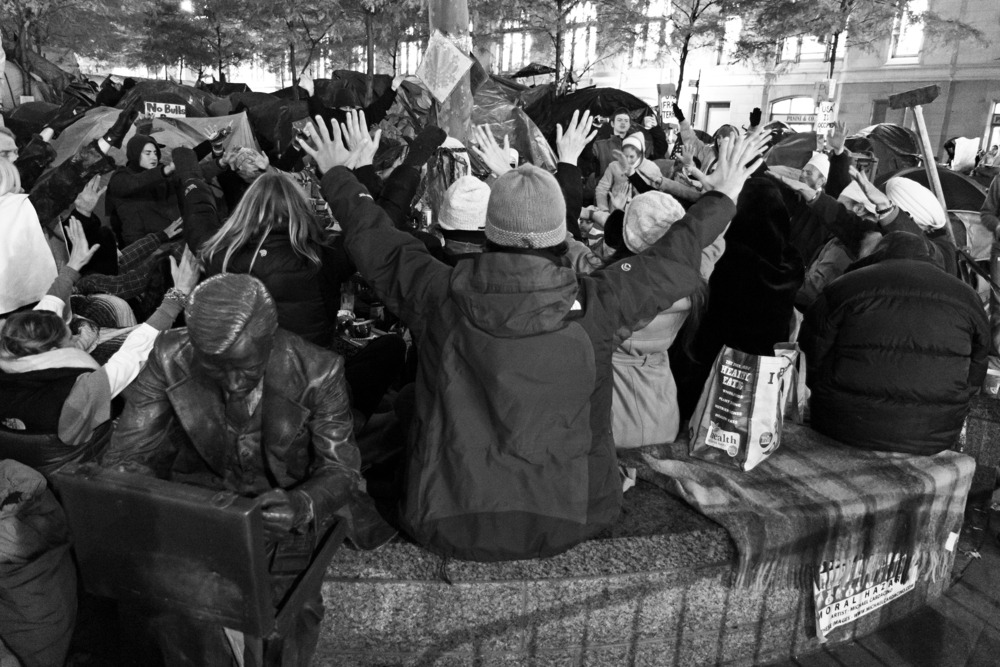 Last year, the Occupy movement successfully ushered in a long awaited public and political dialogue about structural economic inequality. That accomplishment—where others had tried and failed—may have emerged directly from how Occupy handled themselves as a movement, using a transparency and inclusiveness that many derided at first. The Occupy movement’s inclusive methods may not have been perfect but they worked and are undeniably instructive to the rest of us working to make a more just and equitable economy/world/community. Here, then, is a reflection from an expert on governance with a discussion of what might be learned.

Subscribe now to NPQ’s print magazine to read “General Assembly,” a chapter from Occupying Wall Street: The Inside Story of an Action that Changed America, by Writers of the 99%.

Even when the Occupy Movement was in full swing last fall and in the news on a daily basis, many in the nonprofit sector ignored the movement, treating it as something that had little to do with the work at hand. Although the mainstream media acknowledges the impact the Occupy Movement has had on the national dialogue about economic inequality and capitalism, the nonprofit community has missed opportunities to consider how innovative movement practices might be applicable to their work. Moreover, given that much of the sector fundamentally deals with the consequences of this country’s economic inequality, the Occupy Movement offers nonprofits new opportunities to increase their impact, while also challenging the status quo of nonprofit practice.

Even now, I can hear some of you saying, “but it wouldn’t stand the test of time” or “it can’t work in a professional setting” but I would suggest that you suspend those barrier erecting thoughts for a bit and just consider how these ideas and methods might be integrated into your governance systems – and by governance, I am not simply referring to your board.

One exciting aspect of the movement that warrants significant consideration by nonprofits is the innovative governance and decision-making structure of the movement’s General Assembly. Described in the recently published Occupying Wall Street: The Inside Story of an Action that Changed America[i] as “one of the defining experiences of the movement,” the General Assembly structure and process offers the sector a valuable methodology to consider. As a “horizontal, leaderless, consensus-based open meeting which focuses on decisions that affect the whole group,”[ii] the General Assembly structure provides a valuable illustration of how governance decisions can build ownership, community engagement, and activism by using a radically different methodology than the typical nonprofit structure.

Contrary to the typical board governance model where a small group holds all the governance and decision-making power within the structure of a board, in the General Assembly model governance decisions are made by hundreds and often thousands of people working together over the course of several hours to make decisions about future strategy, political positions, actions, and structures of the local occupation. As described in Occupying Wall Street, it is based on a set of highly structured procedures that result in collective agreement or modified consensus. A fundamental component of the Occupy movement’s decision-making design is the formation of a large number of working groups, which generate and submit proposals to the General Assembly for consensus decision-making.

The success of this methodology challenges several foundational principles of normative nonprofit governance. The General Assembly model counters a fundamental principle embraced by most nonprofits—that is, that a hierarchy or small group is necessary for effective governance and leadership. It also challenges the practice of insulated governance—that is, the typical practice of boards doing most of their work behind closed doors. The Occupy movement has reinvented the prevailing concepts of “transparency” and “inclusion” by engaging in 100 percent transparent practices. Through the use of their “real-time” website—which announces upcoming General Assembly and working group meetings, presents live streaming video of the Assembly meetings, and engages in a host of live social media messaging—the Occupy movement continually engages new people in the shared decision-making process.[iii]

The movement also introduces the practice of “direct democracy,” a process in which all involved are engaged directly in the decision-making process rather than through designated or elected representatives who may or may not have genuine accountability to their constituency. According to the Occupy movement, direct democracy is a practice that ensures that “everyone is empowered and heard.”[iv] In contrast, most nonprofits have not considered using representational models, but rather follow the traditional models of self-selected or “self-perpetuating” boards. Unfortunately, even “representational boards” often have few accountability mechanisms to ensure two-way engagement and mutual accountability with their constituencies.

The Occupy movement also challenges the traditional model of nonprofit leadership, which holds that leadership is most effective if it is embodied in one individual (such as the executive director or board chair) or in a small group of experts such as a board with the power to make decisions on behalf of the organization. Instead, the movement uses a power-sharing governance model, drawing on principles similar to those found in the “community engagement governance”™[v] framework (see previous NPQ articles), in which power is redistributed among key stakeholders.

What Are the Implications for Nonprofit Governance?

The effectiveness of the General Assembly, its accompanying working group structure, and ultimately the Occupy movement in general, challenges the nonprofit sector to consider alternative approaches to governance—approaches that open up the boundaries around the isolated structure of the board for greater impact. Using a highly structured process, large groups of people who will be affected by group decisions can effectively make high quality and effective governance decisions. They can successfully address key community and political needs and issues while concurrently building community ownership, increasing support (including funding) and community/national impact. Shared leadership structures offer opportunities for the development of new and more diverse leadership, as well as for creative problem solving. In addition, it’s clear that the extensive use of social media by the Occupy movement has created a level of governance transparency that is unprecedented in the nonprofit sector. If nonprofits were to use many of these strategies, the subsequent open boundaries would create new and exciting opportunities for increased community participation, democracy, and impact.

The Occupy movement’s “direct democracy” philosophy and innovative, transparent governance practices may feel uncomfortable, risky, or even threatening to some in the nonprofit sector. But its success and future possibilities offer nonprofits powerful practices that could be qualitatively different from anything we have seen before in the sector. The Occupy Movement says, “We are the 99 percent and we are more powerful than they’ll ever be.” What if nonprofits working on other critical efforts could also build this power?

[i] Writers of the 99%, Occupying Wall Street: The Inside Story of an Action that Changed America. New York: OR Books, 2011.

[ii] Occupy! Your Guide to the International Occupation Movement of 2011.

Judy Freiwirth, Psy.D., is the principal of Nonprofit Solutions Associate. She is a contributing author to a recently published book, Nonprofit Governance: Innovative Perspectives and Approaches. She serves on the board of the national Alliance for Nonprofit Management.