When a School Markets Students as Charity Cases

Fundraising in public schools is a growing, competitive industry, and it can be a precarious one for students and teachers.

Philanthropic giving for K-12 education rose more than 70 percent from 2000 to 2010, according to a Michigan State University study. By some estimates, it’s a few billion dollars each year.

Amy Brown’s forthcoming book examines how a NYC public high school managed its image to donors and critiques big philanthropy’s role in public education. A Good Investment? Philanthropy and the Marketing of Race in an Urban Public School is based on her two years at the pseudonymous “College Prep Academy.” 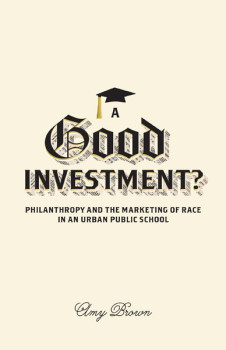 College Prep’s students are mostly black and Latino. Seventy to 80 percent receive free or reduced lunch, and nearly everyone goes on to college. The school boasts that it grooms these students into upwardly mobile professionals; Brown says that made the school prized by donors.

College Prep’s focus on image and its quest for philanthropic dollars is part of a larger trend, she says. “The critique that I’m making is not necessarily about this particular school. College Prep is a place that’s representative of a general current in the way that education in the United States and other countries is going today — this kind of market-based and competitive model.”

“Professionalism” is part of College Prep’s culture. Brown recalls that teachers were encouraged to walk around classrooms with clipboards. “Many teachers would take off professionalism points for students who were out of uniform. So students who wore doo rags or hoodies or scarves, or students not talking in ways that they thought were appropriate; cursing, talking too loud, maybe black vernacular in class.”

Professionalism messages appeared throughout the school, including this flyer. Brown notes that the flyer’s very existence shows how much students resisted the rules.

Sharhonda Bossier was one of College Prep’s few black teachers. She says her well-intentioned white colleagues were often ill-equipped to connect culturally with students, many who identified as African-American but came from the Caribbean and Latin America.

“Kids don’t necessarily have the language to talk about what it feels like to have a teacher not understand you and your culture. And you have teachers who are not confident in their own ability to manage a classroom, and who have not done their own work around figuring out what it means to be white and a person of privilege working in a school that serves predominantly low-income kids of color in Brooklyn. And so time and time again, we would see these blowups between kids and teachers.”

Bossier once participated in a promotional video for the school. But she had second thoughts after seeing it.

“It occurred to me that we were trying to sort of sell this school as something that was literally saving the lives of the students we were serving, and to convince our donors that there would be no way we could do it without them and their generous support. And that is deeply problematic. Because I don’t know that we were doing a much better job than anyone else,” she says. “It was hard to feel like I was featured in a video that was painting a picture of our students as charity cases. But I also knew that a lot of the enrichment experiences those donor dollars allowed us to provide for students would not have been available otherwise.”

Keeping up the numbers

During Bossier’s first semester teaching U.S. history, many of her students didn’t hit their first benchmarks. “I entered zeros in the grade book. The expectation was that I figure out how to fix that because that was a major selling point of the school. So much so, that teachers certainly felt pressure to ensure that our grades and our passing rates allowed for the maintaining of that narrative,” she says.

Bossier appreciates that College Prep went to great lengths to help struggling students. But she says it’s important to allow them to fail and learn how to get back up.

College Prep alum Keara Mariano says if the school really wanted to prepare students for the rigors of higher education, they needed to quit the hand-holding, like mailing college applications for students.

Brown says the fundamental problem with big philanthropy is that it supports a competitive ideology and furthers inequity. That’s because it operates on the assumption that not everyone deserves funding or resources because not everyone knows how to do things the “right way.”

“All kids are deserving of this” Brown says. “And I think if we approach it with a different ideology or looking toward a different goal, we could think about moving towards equity.”

Bossier understands Brown’s concerns. But she says the generosity of some wealthy people helped her get to where she is today. The challenge is to figure out how all kids can get a quality education. “I don’t think that the right answer is to say, ‘We should do without private philanthropy in public education.’ “