Where are the Black Male Teachers in Public Schools? 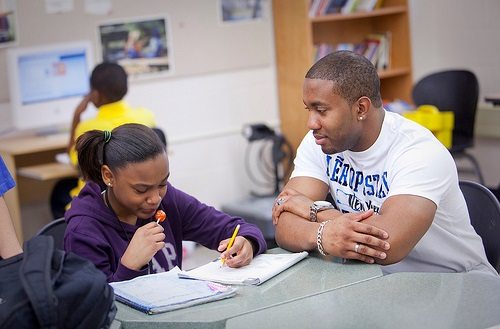 U.S. Secretary of Education Arne Duncan set a 2015 goal to bring more black male teachers to U.S. schools. “We want to have world-class teachers in every classroom, there is nothing more important, but for me, it’s also important that those teachers reflect the diversity of our nation,” Secretary Duncan told NBC News.

It has been reported that less than two percent of the nation’s teacher workforce is made up of black men. In fact, almost 82 percent of public school teachers are white. This is disproportionate to the diverse nature of K-12 students, who are 50.3 percent African American.

In an essay in Education Week, Donald G. Nicolas, a fifth-grade teacher, discusses his own observations of the experience:

“As a black male teacher who has mentored other black male teachers, I can speak to the fact that parents, students, and fellow teachers may watch the black male employee more closely because of the rarity of the situation. The educator as well as the school community must be prepared for this. It takes a certain amount of character to accept and live up to this reality and the expectations that come with standing out.”

The lack of diversity of teachers in public schools is not a new issue. In 2002, NPQ reported that Chicago was one of the only major U.S. cities with a higher percentage of teachers of color than white teachers. Dr. Laruth Gray, a scholar in residence at NYU’s Steinhardt School of Education’s Metropolitan Center for Research on Equity and the Transformation of Schools, stated, “The shortage of black male teachers is rooted historically.”

So what can we do to change the status quo? Bristol recommends placing black male teachers in schools with varying demographics, not just in the lowest-performing schools. He also recommends more professional development and for administrators to consider the dynamics of the school before making hiring decisions. These two items are applicable, by the way, to both black and white teachers.

“Too often, you find a reluctance of folks to talk about things,” Duncan said. “It’s challenging for people to have honest conversations, to be frank about this, but the only way to get better is to be transparent with the truth, which can be good, bad, ugly, and sometimes brutal. But if we’re not willing to deal with it, it’s impossible for us to make things better.”

NPQ will continue to cover this important issue, but we would also welcome perspectives from our readers.—Erin Lamb