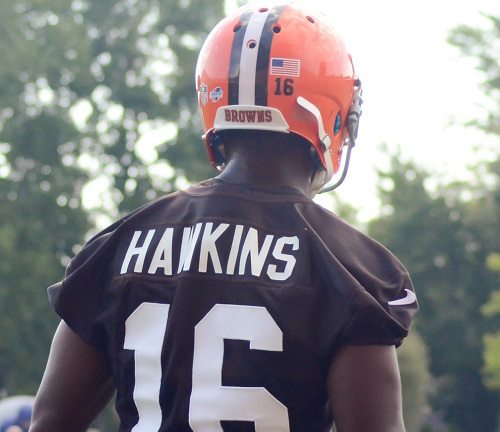 Earlier this month, Cleveland Browns wide receiver Andrew Hawkins stepped onto the football field wearing a T-shirt with the words, “Justice for Tamir Rice and John Crawford.” Both individuals were killed by Ohio police in recent months while holding a toy gun and air gun, respectively. Both individuals were also black, leading to their inclusion in protests against recent police shootings.

And while the Cleveland police union has asked for an apology from Hawkins and his employer, the Browns have followed the lead of the St. Louis Rams in refusing to reprimand the peaceful protest of their players. Concerning Hawkins’s actions and the subsequent request of the police union, the Browns released the following statement:

“We have great respect for the Cleveland Police Department and the work that they do to protect and serve our city. We also respect our player’s rights to project their support and bring awareness to issues that are important to them if done is in a responsible manner.”

While President of the Police Patrolman Union in Cleveland Jeff Follman believes that “it’s pretty pathetic when athletes think they know the law,” Hawkins recognizes his right to peacefully protest according to his beliefs. As a citizen, Andrew Hawkins has a right to express his opinion and Follman should recognize the difference between freedom of expression and what he believes is “disrespecting the police.”

While speaking with the Associated Press, Hawkins said:

“My wearing of the T-shirt wasn’t a stance against every police officer or every police department. My wearing of the T-shirt was a stance against wrong individuals doing the wrong thing for the wrong reason to innocent people. I utterly respect and appreciate every police officer that protects and serves all of us with honesty, integrity and the right way, and I don’t think those kind of officers should be offended by what I did. […] If I was to run away from what I felt in my soul was the right thing to do, that would make me a coward and I couldn’t live with that.”

In light of a recent report from the U.S. Justice Department on misconduct within the Cleveland police force, Hawkins’s protest should sound the alarm for self-evaluation rather than condemnation. Without the occasional critical, introspective review, improvement and growth in police departments across the county will be stagnant at best, just as in any organization in the public or private sector. No organization should be free from public criticism, as this oversight is essential to maintaining accountability to the communities they serve. Nonprofits and government agencies alike must remember that service to the public interest should be fundamental: If the community has doubts and concerns, shouldn’t they be addressed?—Michele Bittner