We write to you today with urgency and excitement.

Our urgency comes from the critical issues to be addressed in our country—the climate crisis, racial injustice, worsening income inequality as a result of the pandemic, opioid addiction, gaps in healthcare access, crumbling community infrastructure in vast parts of this nation, to name just a few.

Our excitement derives from our work as trainers and capacity builders for hundreds of local, regional, and national nonprofits. We need more community-based nonprofits, especially those providing critical services, to be part of the collective public pressure to make legislators and policymakers confront these issues and engage in the dialogue needed to arrive at just and sustainable solutions. We believe every group of any size has a role to play to build and mobilize community power for the larger good.

We speak from experience. As the founder of Community Votes, Louisa has helped large direct service organizations turn more citizens into voters. Mohan has registered and mobilized voters during several national elections and witnessed the power of neighborhood groups educating and informing people and bringing them to the polls.

Countering the Boom and Bust of National Election Cycles

There is a real (and diminishing) opportunity for nonprofits to build on last year’s historic voter turnout. If we don’t seize this moment, we are on course to experience a huge slide backward because of a predictable and much-studied effect: the greatest number of people pay attention to national issues and come out to vote in presidential elections. Less people show up for mid-term ones, and even fewer cast ballots for local elections and primaries.1 Many organizing efforts, and the funding that supports them, also follow this cycle. This is a real problem. Paying attention only to infrequent national elections means an enormous opportunity to make ongoing, systemic changes at the local level is lost.

Nonprofits can help to counteract this boom-and-bust cycle. They can speak to their clients and constituents about the importance of local and primary elections and the need to be involved beyond elections—to hold political leaders accountable for making sure people-centered policies remain the priority outside of election cycles. An easy way for a nonprofit to become a hub of election information is to visit Nonprofit Vote’s website and find ways to encourage more people to show up for all elections, beginning with this year’s local races and next year’s midterm races. Organizations whose services are funded by state and local governments can educate their clients that ongoing electoral and post-electoral engagement allows them to elect and influence the people who make decisions about the critical, government-funded services they receive.

Beyond voter mobilization and electoral engagement, nonprofits can educate their staff and clients about the power of engaging with local and regional organizing and advocacy. Our communities need to know that building grassroots power in this way really matters to their lives. The Fight for $15 is a prime example. In 2012, the Service Employees International Union (SEIU) created the campaign because they recognized the US Congress was not going to raise the $7.25 federal minimum wage. Nine years later, seven states plus the District of Columbia have pledged to increase their minimum wage to $15 or higher; this year, 74 cities, counties, and states are also raising their minimum wage.2 The success of this campaign means millions of workers will get a raise, and many will no longer be working for a poverty-level wage. As a direct result of building power and influence from the ground up, members of both major political parties are now considering raising the federal minimum wage.

The work of the Black Organizing Project in Oakland, California is another example of successful year-round, locally focused organizing. For nine years, the Project worked to remove police from the Oakland, CA school district. After massive public protests questioning the role of police, their work paid off. In June 2020, the Oakland School Board voted to replace the 67-member police unit working in public schools with social workers, counselors, and restorative justice ambassadors.3

Many community-based organizations providing services already incorporate organizing and power-building activities in their portfolio. In New York City, for example, Asian Americans for Equality, Neighbors Together, CHHAYA Community Development Corporation, and MinKwon Center for Community Action all provide direct services: emergency food, legal services, housing assistance, and access to public benefits. They each also prioritize leadership development and organizing so constituents can speak about their communities’ needs and engage with elected representatives and policymakers to get those needs met. 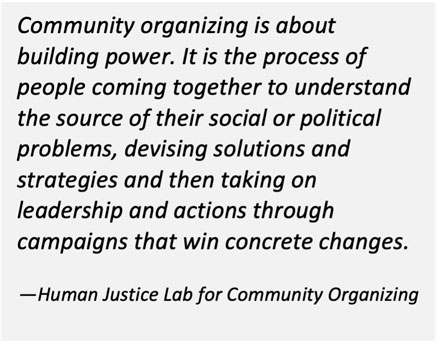 The good news is that social service organizations already have the critical ingredients to begin organizing and building local power.4 First, relationships are the foundation for organizing, and service groups are connected, often deeply, to clients and consumers directly affected by social and political problems. Service organizations can also readily accomplish an organizer’s second task: providing political education.

This is not just optimism speaking. We have good data that shows, for example, that nonprofits can lead effective voter mobilization efforts, a key strategy within power building. <a href="https://www.nonprofitvote.org" target="_blank" data-wpel-link="external" r