Will Renewed “War on Poverty” Chatter Spark More Than a War of Words? 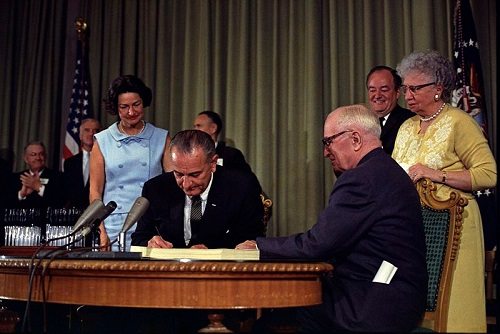 On January 8, 1964, U.S. President Lyndon Johnson declared a “War on Poverty” in his State of the Union address. Fifty years later, there appears to be growing bipartisan support to refocus on this issue and the related issue of soaring income inequality in the United States. Should we in the nonprofit sector be hopeful, cynical, or motivated to act in new ways?

There is some justification to view the increased volume of poverty speechmaking with hope as a potential watershed moment in national policy. The issue is being discussed by leaders of both major political parties in the United States, portending that “poverty is suddenly the subject of bipartisan embrace,” according to the New York Times. Republican House Majority Leader Eric Cantor and Florida Senator Marco Rubio have recently promoted strategies such as education reform, workforce training, and converting federal antipoverty program funding to state block grants to break “the vicious cycle of poverty.” President Barack Obama has declared that his 2014 State of the Union speech next week will focus on strategies to address income inequality, such as extended unemployment benefits, college affordability, and minimum wage increases.

Another promising factor is newly elected Pope Francis’s sustained call not only for Catholics, but global leaders to address poverty and inequality. His high profile exhortations over the past few months have the potential to engage religious conservatives into new coalitions around this cause.

Furthermore, the portion of the U.S. population experiencing poverty in the United States has been rising for over 40 years, spanning nearly two generations who presumably care about the issue as a result. While the official poverty rate today, as calculated by the U.S. Census Bureau, is lower than at the start of the War on Poverty (19 percent in 1964 vs. 16 percent in 2012), it has been rising since 1973, when the rate was 11.1 percent. Annual statistics mask the recession’s deeper impact in terms of “temporary” poverty rates: Between 2009 and 2011, one in three Americans experienced at least some months in poverty. More than half of Americans surveyed today say they have at least one family member who is poor.

Finally, income inequality in the United States is at the highest level it’s been since 1928, right before the Great Depression. During the recent recession, the situation worsened, as the top one percent of American households received 95 percent of the country’s income gains between 2009 and 2012. Surely, this should be enough to move public policy toward greater focus on solutions to poverty and income inequality?

But there’s also ample reason to view the “bipartisan embrace” with cynicism regarding whether meaningful political action will result. Already, poverty reduction strategies are becoming fodder for differentiating the overall merits of each party in the run-up to mid-term elections. At the simplest level, the favored strategies depend on whether one believes that government antipoverty programs to date have on balance helped the poor (Democrats) or hurt the poor (Republicans): they reflect the larger debate about the appropriate size and role of government. The promise of a bipartisan approach to a serious social issue could easily devolve into mere tit-for-tat political rhetoric and brinksmanship devoid of any real content.

Equally challenging to progress in Washington are the ideological divisions within each party. Republicans have their “new populists,” party-liners, and Tea Party conservatives. Their challenge is to stay conservative while overcoming perceptions of being “out of touch” or insufficiently compassionate with the poor, as infamously reflected in 2012 GOP presidential candidate Mitt Romney’s “47 percent” comments. Democrats, while dominated by their Clinton-era pragmatic centrists in recent years, also have an increasingly vocal and liberal populist contingent. Their challenge is to reinvigorate the party’s historical association with the War on Poverty without alienating wealthy donors and pro-business supporters with too much of a class-based “rich vs. poor” framing of income inequality. This diversity on both sides of the aisle makes it difficult for advocates to gain unified political support for bold proposals within their own parties.

Furthermore, even with policy leadership from Congress, there is a bigger problem in terms of general societal concern about the issue in the United States. According to a 2012 Pew Research Center report, barely half of Americans consider income inequality a big problem in the U.S. even though they are aware of rising inequality. And a 2013 study (also by Pew) found that neither Republicans, Democrats or independents ranked “helping the poor and needy” among their top five priorities for Congress, although Democrats ranked the issue higher (at eighth) than others. Thus, there is not a large or cohesive enough political constituency to exert pressure for reducing poverty and income inequality, as there was in the Sixties.

Finally, economic conditions today and the capacity of the government to fund large-scale initiatives are far different than during the initial “War on Poverty.” Today’s sluggish national economy contrasts with the heady economic growth and global hegemony that fueled optimism about public spending 50 years ago.

And yet, here in one of the world’s most wealthy nations, poverty rates are still stubbornly high and income inequality approaches the obscene. Something has to give. While the nonprofit sector has the opportunity to play a more visible and unified role than it has ever undertaken, its diversity creates some of the same leadership issues as the bipartisan debate demonstrates. This is true especially when the conversation goes beyond determining compassionate approaches to addressing poverty, and moves into how the underlying causes of income inequality relate to poverty.

To date, many nonprofits have focused advocacy communications on the direct implications of cuts in program funding, drawing attention to the human suffering caused by the federal government’s divestment in core social services, as well as evidence-based programs that increase income and promote economic opportunity. As Deborah Weinstein of the Coalition on Human Needs points out, “The biggest lesson from the War on Poverty is that a national commitment to a goal allows many initiatives to be tried, with some working better than others. To work toward the goal of poverty reduction, we must respond to changing conditions and new evidence. We should welcome creative approaches to the task at hand while insisting that they build upon, not undermine, existing programs…that have demonstrated their effectiveness.”

But far fewer have ventured beyond appealing to compassion and fairness as the justification for public investment in the “War on Poverty.” And unless we believe that policies supporting unbridled income inequality help to reduce poverty, we can’t talk about poverty reduction without talking about income inequality in the same breath. To argue for a more systematic approach to addressing income inequality, including income redistribution policies, is to risk alienating our own wealthy constituents, donors, and in some cases, highly compensated staff. Uncomfortable? Yes. But we can’t afford to be bystanders.

Commentator Mark Rosenman argues that “nonprofits (of all stripes) must exercise their moral authority to advocate for economic policies that give a hand up to the poor and advance a vision of the common good that includes all Americans.” To influence policy debate on poverty reduction and income equality, we must be willing to engage in parallel conversations in our own organizations, in our communities, and across the sector. We need to organize a broad constituency for change. We must model action beyond words, across class and political differences, to right the egregious wrongs of persistent poverty in our country. If not the nonprofit sector, who?—Kathi Jaworski