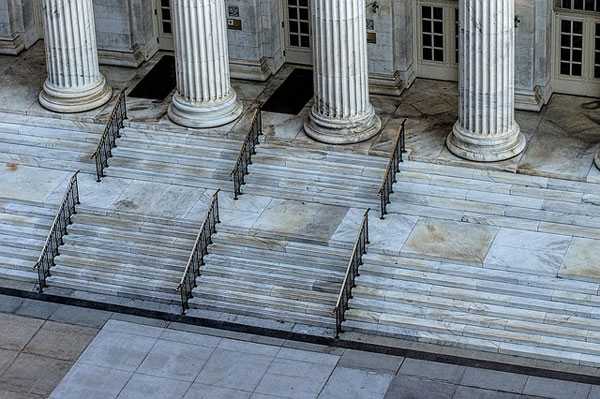 The wave of teacher strikes that has swept across the country and the success of the Fight for $15 have grabbed headlines. They’re seen as signs of a resurgent labor movement, a step back to a time when workers could protect their jobs and bolster their economic security. At the same time, those interested in decreasing the power of workers have continued their decades-long effort to move the arrow in the opposite direction, decreasing job security and the economic benefits of work.

For example, there’s been an ongoing effort to create a legal framework that would reclassify their workforce of digitally connected laborers from a team of employees to a network of independent contractors. Companies like Uber, Lyft, and GrubHub see their futures tied to the claim that those who work for them are businesspeople offering their services in an open market. When such employers can classify their workers as contractors, it offers significant financial benefit. According to the New York Times, it means “they don’t have to contribute to unemployment insurance or workers’ compensation, or heed minimum-wage and overtime laws. Industry officials estimate that a work force of employees costs companies 20 to 30 percent more than a work force of contractors.”

As NPQ recognized in an earlier look at the changing work environment back in 2015, “Workers in the new [gig] economy [will] need a new approach to the provision of insurance, pension and other supports that were previously supplied by traditional employers.”

Marla Kanemitsu of Tusk Ventures, which has been advocating on behalf of gig economy firms, claims that this is ultimately to the advantage of the workers; under this contractor, companies can offer certain benefits they currently do not for fear of establishing employer-employee status, like retirement savings and healthcare. However, For the worker, this change in status often means greater risk, lower total earnings, and the need to rely on safety net programs both public and private.

Where possible, the gig sector has focused their advocacy on changing state law for their benefit, and with some success: “In the first six months of 2018, six states passed bills broadly carving out gig workers from employment laws and effectively classifying them as contractors.” Because changing state law is a public process, it can be hard to sway legislators to act against the interests of workers who may be harmed and take their frustrations to the polls in the next election. So, the proponents of turning employees into contractors have turned to a quieter channel, asking state regulators to enact proposals that would quietly allow them to have their sway.

Bradley Tusk, chief executive of Tusk Holdings, of which Tusk Ventures is one arm, explained the attractiveness of working to change regulations, rather than seeking legislative action, to the Times. “You’re not tied to the legislative calendar. If the head of a committee in the State Assembly doesn’t like it because they have some business owner in their district, you don’t have as much of a problem anymore.”

On the other side, unions, once the bulwark of worker protections, have seen their ranks dwindle. Only 10.7 percent of the workforce is unionized, compared with more than 20 percent in 1983, and more than half the states have open shop laws that limit union membership and influence. But, as teachers and domestic workers have shown, there is still power in collective action. Last year’s decision by the US Supreme Court in the Janus case was targeted directly at the public sector unions that have seen a resurgence. As described in NPQ, it determined that “payment of union dues in the public sector will be entirely voluntary, hurting union finances and diminishing unions’ ability to advocate on behalf of their members for better wages and working conditions—and, of course, for the nonprofit sector, reinforcing wage ghettoes by making it harder for workers to climb out of them.”

In its wake, 14 new lawsuits have been filed in California to mirror others filed in states across the nation that seek to further the injury caused to unions by the Janus loss. According to the Sacramento Bee:

The new lawsuits argue that contracts signed before the Supreme Court’s decision are invalid because workers did not know they had an alternative to paying full union dues. They ask courts to compel the unions to reimburse fees to workers. The cases also demand that unions let their members quit paying dues at any time, ending a common practice in their contracts that allows bargaining units to specify when members can separate.

San Francisco State University professor of labor and employment John Logan told the Bee that the sheer number of lawsuits is “a strategy in itself.”

These cases have not been successful so far, but unions still have to devote resources and time and energy to defending these cases when they could be doing other things—providing services, representation to members, trying to organize non-members, etc.

The plaintiffs in these suits are often recruited and funded by a network of conservative nonprofits that see union power as dangerous. “These groups don’t bargain for state workers—or any workers,” said SEIU (Service Employees International Union) Local 1000 president Yvonne Walker, who leads the largest union in California’s state government. “They don’t go to the legislature to fight for workers to have a secure retirement. They don’t come into our communities and work to ensure everyone has affordable housing. Instead, they do one thing—fund multimillion-dollar lawsuits that attempt to bankrupt unions.”

Another possible approach for empowering workers is for workers to join forces and gain ownership of the platforms. As MJ Kaplan wrote over a year ago in NPQ, “Platform co-ops offer a mechanism by which users co-own and govern these companies, providing a means for users to protect their data judiciously rather than exploit it through algorithms to maximize profit…a platform co-op makes it possible to subject the decisions that are made about when and how to use private data to democratic control.” The potential uses of such worker-owned platforms are widespread. Kaplan notes that “basically any industry where an app mediates purchases” could benefit: “Platform co-ops have already emerged in…home care, home cleaning, photo sharing, and ride-hailing services.”

Whether workers are employees or contractors, whether they are represented by a strong or weak union, whether they are able to gain ownership of the platforms through cooperatives or not…these are not just academic debates. The quality of countless individual lives hinge on the outcomes.—Martin Levine