Workers at Philadelphia Museum of Art Seek to Unionize

Not even a pandemic, it would seem, has slowed the drive to unionize among art museum workers. Writing for Artnet News, Eileen Kinsella reports that on the Friday before Memorial Day, a “supermajority” of eligible staff at the Philadelphia Museum of Art turned in signed union cards, announcing their intent to unionize through District Council 47 of the American Federation of State, County, and Municipal Employees (AFSCME DC 47).

According to Stephan Salisbury of the Philadelphia Inquirer, the percentage of workers signing union cards exceeds 65 percent. The museum employs about 475 people and, before the pandemic, had an estimated annual budget of $60 million; which is expected to fall to $40 million due to the pandemic. As of the end of 2018, the museum’s endowment stood at $487 million.

In a letter to management, workers are requesting that museum management grant voluntary recognition to their union. To date, museum management has offered a brief email statement, saying, “The museum received a letter notifying it of the intent to file a petition and recognizes the right to organize. The museum will give the letter close attention.”

Voluntary recognition is rare, but it has happened a couple of times recently in the art world. Last December, as NPQ covered, management at the Los Angeles Museum of Contemporary Act (LA MOCA) agreed to voluntarily recognize a new union formed by more than 100 visitor services employees; they, too, affiliated with AFSCME. This past January, the Shed in New York City voluntarily recognized a union of 75 workers, who are members of United Auto Workers (UAW) Local 2110.

On their website, the Philadelphia Museum of Art Union members identify some of the key reasons for forming their union. These include the desires to:

The reference to “harassment and discrimination” refers to issues well documented in the New York Times earlier this year. The matter, involving charges of misconduct of former museum manager Joshua Helmer, was serious enough that over 400 current and former staff signed a letter detailing their complaints this past January.

According to Kinsella, who heard it from Nicole Cook, program manager for graduate academic partnerships, conversations at the Philadelphia museum about unionizing started roughly a year ago, after art and museum workers started sharing salary information in what NPQ labeled at the time a “collective act of transparency.”

Cook says that the salary sharing “opened an honest conversation not only about compensation but also about more tangible benefits, as well as about equity and inclusion in the workplace, which very organically led to conversations about organizing for better conditions.”

So far, Kinsella reports, the museum has not had any layoffs related to its closure, which is currently in effect until June 30. Instead, the museum implemented salary cuts for all workers making $30,000 or more.

Cook says she hopes the union will be well received by art museum management:

I think I speak for everyone in my unit when I say that we’re very grateful for what the museum has been able to do for us and we’re excited to work in collaboration with upper management. We very much hope that they will decide to voluntarily recognize us…and start working toward a contract.

Cook, who has been at the museum for about two-and-a-half years, adds that the unionization drive “is coming from a place of sincere love and respect for the institution and we really do think a more empowered staff will lead to a better museum.”—Steve Dubb 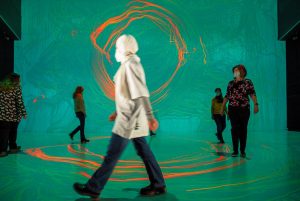 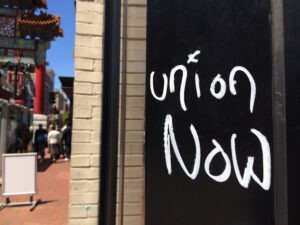