“You Are Disgraceful”: Reaction to Video of Fraternity Taking Part in Racist Chant is Strong, But… 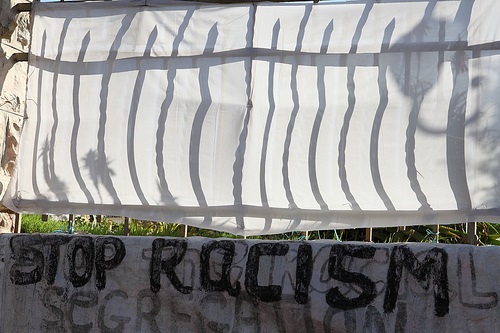 Just days after Selma celebrated its 50th anniversary of the historic march for voting rights, a crucial moment in the Civil Rights Movement, a shocking story of a clearly racist incident is emerging from the University of Oklahoma along with the accompanying forceful response from its community.

The University of Oklahoma has suspended the campus chapter of the Sigma Alpha Epsilon fraternity and has expelled two students after a video emerged of suspected students of the university chanting a racist song. The two students, who were not identified by university president David Boren, were expelled for their “leadership role” in singing the song and an investigation will continue into the other students.

The video was anonymously sent both to the campus paper and Unheard, a campus alliance of black students, who uploaded the video to Twitter with an accompanying tweet, “Racism is alive at the University of Oklahoma. @President_Boren,” referencing President Boren’s Twitter handle.

Racism is alive at The University of Oklahoma. @President_Boren pic.twitter.com/eAvnPD8jxA

The nine-second video shows white students on a bus in suits and dresses traveling to a formal event and chanting, “There will never be a ni**** SAE. You can hang him from a tree, but he’ll never sign with me.” The orchestrated chorus of the song makes it clear this is not the first time these students have sung the song.

To their enormous credit, President Boren and the fraternity’s national leaders acted swiftly in condemning the incident, launching a full investigation and joining other students at the university in expressing their disgust at the remarks.

“To those who have misused their free speech in such a reprehensible way, I have a message for you. You are disgraceful,” said Boren at a rally on campus.

At a news conference, President Boren said that he was “sickened by the video” and “couldn’t sleep.” He has ordered the students to move out of the fraternity house by midnight today, March 10th, and would also not be helping the students find alternative housing. (The SAE fraternity house was also vandalized following the release of the video.)

But this behavior does not appear to have emerged full blown out of nothingness; as Dean Obeidalla writes on the Daily Beast:

“This fraternity brags on its website that it was started in 1865 in the ‘Deep South.’ (I can’t help but think racial dog whistle when I see that term, given the SAE’s founders’ ties to the Confederacy.) And SAE was at one time was a whites only fraternity as noted in its 1903 ‘book of rituals’ that limited membership to ‘members of the Caucasian race.’ Keep in mind that the students on the bus were heading, per media reports, to a Founders Day event to celebrate very white men who gave us these policies.”

The group which released the video, Unheard, have, as late as mid-January complained publicly about feeling “unwelcome” on the OU campus. In a public meeting, they complained about the dearth of black faculty on campus and the low retention rates among black students. One of the students commented that OU prides itself on being a family, “but am I part of that family?”

In short form, while we are looking at the structures of racism and wondering at their longevity in places like Ferguson, we would do well to understand that such structures are always supported by culture whether spoken or unspoken. Here, that culture was not only spoken but sung as part of a bonding ritual. But it is critical to understand that even as others try to distance themselves from the overt expression of racism, it can lurk covertly in pernicious ways—even in institutions that have thrown up their hands in horror at the chanting of it.—Shafaq Hasan