You First: Leadership for a New World—“SWOT’samatteryou” 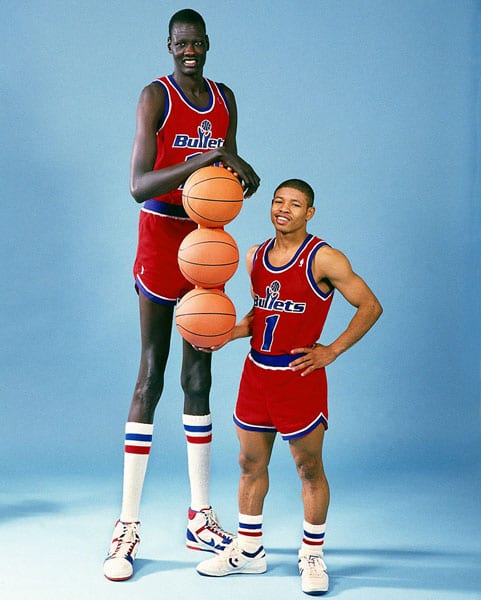 Editors’ note: This column comes from the Fall 2018 issue of the Nonprofit Quarterly. Part of this column was adapted from Chapter 5 of Mark Light’s Results Now for Nonprofits: Strategic, Operational, and Governance Planning (John Wiley & Sons, Inc., 2011).

As I was packing up my office for a recent move, I stopped for a moment to reflect on my framed 1987 Life Magazine centerfold of the National Basketball Association (NBA) Washington Bullets players Tyrone Curtis “Muggsy” Bogues and Manute Bol, standing side-by-side. It still amazes me that Muggsy is five feet three (and still the shortest NBA player of all time) and Manute is seven feet seven (still the tallest, although he shares this honor with Gheorghe Muresan).

Why do I like this picture so much? First and foremost, it’s inspiring. It reinforces a wonderful quote from Arthur Ernest Morgan: “The chief limitations of humanity are in its visions, not in its powers of achievement.” If Muggsy Bogues can become an NBA first-round draft pick, what’s holding me back? Or you?1

Second, I like the juxtaposition of Muggsy and Manute as a cautionary tale, which I often use when asked about the SWOT model. SWOT is the poster child of the design school model of planning that, per Henry Mintzberg, author of oldie-but-goodie The Rise and Fall of Strategic Planning, “underlies virtually all of the proposals to formalize the process of strategy formation.”2 For those not familiar with SWOT, here is Michael Allison and Jude Kaye’s summary from their ever-popular book, Strategic Planning for Nonprofit Organizations:

Your best strategies lie at the intersection of your strengths, weaknesses, opportunities, and threats. “And once a strategy has been chosen, it is implemented. That is essentially all there is to it,” says Mintzberg.4 Think of a funnel—or a sausage grinder, if you’d like. You put the information in the SWOT’s grinder, and out come your best strategies—kind of like Athena, the goddess of war, who was born fully grown from the head of Zeus.

Why so? The strengths and weaknesses portion of the process, as Mintzberg describes it, “may be unreliable, all bound up with aspirations, biases, and hopes…. Who can tell, without actually trying, if the strength will carry the organization through or the weakness will undermine its efforts?”6 This echoes Gary Hamel and C. K. Prahalad’s similar complaint, in the Harvard Business Review, about competitor analysis, which is that the “analysis is like a snapshot of a moving car. By itself, the photograph yields little information about the car’s speed or direction.”7

The third reason I like the picture is it warns me that SWOT can dumb you down and forestall a leap to greatness. Too much focus on where you are now and looking at all that’s wrong with you can be a drag on your creativity and ambition. Way back in 2002, the NonProfit Times printed this warning from nonprofit consultant and author Thomas McLaughlin:

Few strategic concepts have taken hold quite so thoroughly as the SWOT model of strategic planning. It offers an appealingly balanced approach—identify your strengths and weaknesses, and be aware of your threats and opportunities. But in practice it doesn’t deliver. In fact, it tends to divert attention to unproductive areas…like a kindly, well-meaning family doctor who inadvertently gets you thinking about disease when you should be thinking about health.8

My fourth and final reason for liking the picture is that it reminds me of the right order of strategy questions. SWOT begins with where you are today. Then, you decide where you want to go tomorrow. That’s just fine if you are happy with what you’re doing and you want to do more of it. It’s not okay if you want to do something dramatically different, like play basketball in the NBA when you’re five feet three—hello, Muggsy! Or be the first to fly an airplane if you’re in the bicycle business in Dayton, Ohio—hello, Wright brothers! Or present the First National Tour of Les Misérables in Dayton, Ohio, which hadn’t seen a show like it for decades—hello, Mark Light!

Eons ago, when I was the executive director of the Louisville Ballet, I got lucky and saw the pre-Broadway production of Les Misérables at the Kennedy Center. The show blew me away, and I knew I had to be part of that world. Fast-forward two years, and, with a two-month-old baby in tow, I quit my job to move to Dayton and run the Victoria Theatre, a mom-and-pop with a budget of about half a million dollars. The first thing I did was bring the board together to decide where to go next. (No SWOT for us; I thought that was something you did to a mosquito.) The vision was wonderfully simple and compelling—to be the performing arts center. Two days later, I signed a check for half a million dollars made out to Les Misérables. When I left, fifteen years later, we were Ohio’s most-subscribed-to theater, with a budget of over $20 million. Imagine what would have happened if we’d done a SWOT first!

In his biography, Muggsy writes, “I’ve always been the smallest guy around, as a baby, as a little kid, in high school. I think I stopped growing altogether by the time I was ten years old.”9 Imagine doing a SWOT on Muggsy back in high school. He goes through the analysis, is reminded of all his height deficiencies, and he becomes a wrestler instead. He would never have played basketball, he wouldn’t have been an NBA first-round draft pick, and you wouldn’t be reading this article. Thank goodness he grew up poor in the Baltimore projects, where management consultants weren’t out in force peddling the SWOT model.

Oh, by the way, Muggsy is retired, but he is still listed in the NBA’s top sixty for steals and top twenty-five for total assists (passing the ball in a way that leads to a goal) and assists per game.10 The bottom line? The title of Thomas McLaughlin’s 2002 article says it best: “Swat The SWOT: Moving ahead is much better.”11