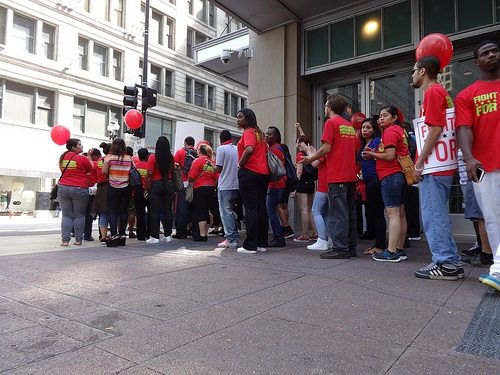 The end of 2013 has been marked with labor protests from workers paid far less than a living wage. NPQ has covered the Walmart actions and the fast-food worker walkout, and we have been struck by the emerging numbers of how many of those workers are forced to depend upon government subsidization in order to get by. To us, this sounds like the government is subsidizing corporations who refuse to pay reasonable wages so that they can fully exploit their workers at will.

Now, Joan Walsh of Salon points out in a powerful editorial that 2013 appears to have been the year that this country acknowledged that the number of Americans who are not only working poor, but have been forced onto the public dole, is a crisis. She writes that, traditionally, Americans hate welfare, “so we’re not sure how to handle the fact that a quarter of people who have jobs today make so little money that they also receive some form of public assistance, or welfare—a proportion that’s much higher in some of the fastest growing sectors of the workforce. Or that 60 percent of able-bodied adult food-stamp recipients are employed.”

She writes that “fully 52 percent of fast-food workers’ families receive public assistance—most of it coming from Medicaid, food stamps and the Earned Income Tax Credit—to the tune of $7 billion annually, according to new research from the University of California-Berkeley’s Labor Center and the University of Illinois.”

McDonald’s workers receive $1.2 billion in public aid, she points out, while the company earned $7.44 billion in profits, and paid their top execs $52.7 million, yet the study concluded that “public benefits receipt is the rule, rather than the exception, for this workforce.”

“Revulsion at subsidizing profitable corporations that pay poverty-level wages is helping fuel a wave of long-overdue organizing and protest on behalf of low-wage workers, from the fast-food strikes that have swept the country to Walmart protests this holiday season. Taxpayers recoil at the notion, but so do many workers themselves.”

Walsh points out in her conclusion that every dollar taxpayers spend subsidizing corporations paying poverty wages is a dollar not spent elsewhere.

NPQ wants to point out additionally that many of these institutions also laud their own charitable generosity. We all need to get much better about looking at the social responsibility of companies more completely and more critically, and I would direct you to Buzz Schmidt’s The Wherewithal of Society.—Ruth McCambridge