It is one of the ironies of history that the Presidential Medal of Freedom is being awarded posthumously to the three civil rights workers—James Chaney, Andrew Goodman, and Michael Schwerner—who were killed during “Freedom Summer” by members of the Ku Klux Klan outside of Philadelphia, Mississippi, on June 21, 1964.

Why ironic? A number of reasons fit, but two in particular. First, Freedom Summer was actually a voter registration effort, formally known as the Mississippi Summer Project, in which a coalition of civil rights organizations recruited college students from around the nation to work with Mississippi activists toward registering as many Mississippians as possible to vote. The three young activists were killed by the Klan, buried in an earthen dam, and discovered months later. During the search for them, the bodies of eight other men, all black, were found, including three other civil rights activists. Now, a half-century after these brave men gave their lives to help break the Jim Crow system, states around the nation are attempting to restrict voting rights, with often very explicit justifications uttered by political strategists about reducing the voting power of black communities. According to USA Today, Schwerner’s widow, Rita Bender, said the best honor Congress “could give to these men and all the others killed or injured in the struggle for voting rights and the dismantling of Jim Crow would be the reinstatement of the Voting Rights Act and its aggressive enforcement.”

A second, equally compelling ironic counterpoint is occurring right now in Ferguson, Missouri. Fifty years ago in Mississippi, as the USA Today story makes clear, the ringleader of the Klansmen who killed the three, Edgar Ray Killen, escaped conviction because one juror held out against eleven others who thought he was guilty, explaining that she couldn’t jail a “preacher.” A grand jury in Ferguson is today debating not whether to convict, but simply to indict police officer Darren Wilson for the shooting death of unarmed black teenager Michael Brown. According to press reports, including leaks from the grand jury to the St. Louis Post Dispatch and the New York Times, Officer Wilson may not be indicted or prosecuted. Fearing violence in the wake of the impending grand jury announcements, people in and around Ferguson appear to be buying guns, particularly “home defense shotguns.” Some dimension of this is being hyped by right-wing websites that warn of “Ferguson thugs [that] arm and train themselves” and “Blacks Scaring White People.” These and other hyperbolic instigations seem like they could have been written 50 years ago by Imperial Wizard Sam Bowers and killing ringleader Edgar Ray Killen as they marauded and harassed and beat many Freedom Summer workers in addition to their murders of Chaney, Goodman, and Schwerner. 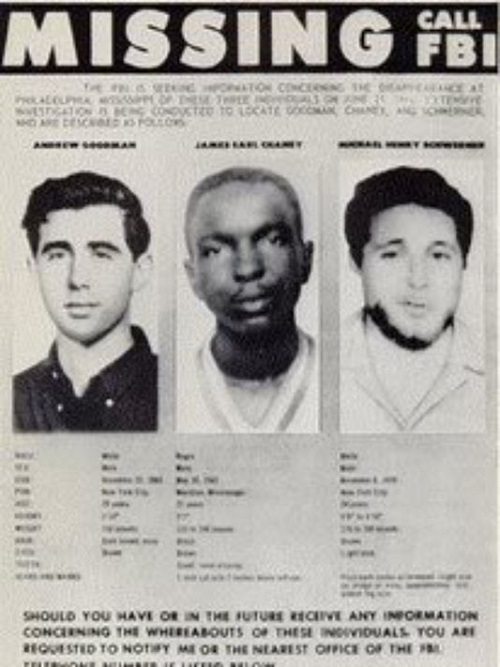 After the killings of the three civil rights workers, President Lyndon Johnson became a lifelong civil rights advocate—the best that the White House has ever seen, bar none. Part of his conversion may have been due to the national and international condemnation the U.S. received during this horrific, barbarous period of American history. Today, Michael Brown’s parents are in Geneva presenting a report to the United Nations Committee against Torture. The Browns’ report makes the case for Brown as one of a number of “victims of torture and/or cruel, inhuman and degrading treatment at the hands of law enforcement” and questions whether the U.S. government is doing enough to educate and train law enforcement personnel so that they don’t perpetuate the treatment they say young Mike Brown had to suffer, reviewing law enforcement statutes regarding guidelines for “proportionate use of force,” and ceasing the arming of local police forces with military grade equipment.

The organization that sponsored the Brown family’s trip to Geneva is the U.S. Human Rights Network, with prominent nonprofit and philanthropic leaders on its board of directors—to name a few, Martin Luther King III; Ellen Dorsey, executive director of the Wallace Global Fund (and formerly with the Heinz Endowments); Puja Dhawan with the NoVo Foundation, the foundation of Peter and Jennifer Buffett; and R.J. Thompson with Lambda Legal. There are consequences when racial injustices in the U.S. come to the attention of international bodies like UN committees. Critics might dismiss the Browns as simply grieving parents of a dead son, organizations such as HandsUpUnited and the Organization for Black Struggle as small and inconsequential, and UN bodies as impotent and feckless, but reading the text of the Browns’ statement reveals cogent arguments and sensible recommendations, such as demilitarizing police forces, putting front-facing cameras on cops, and seriously reviewing procedures and guidelines on use of deadly force by the police.

Rita Bender is right that the restoration and enforcement of the Voting Rights Act would be an important landmark tribute to the three young civil rights workers who were brutally beaten (especially Chaney, the black man) and killed by the Ku Klux Klan gorillas. They could be equally well honored to see the right things done in Ferguson and in response to the police and justice tactics that have made the situation in suburban St. Louis such a cauldron.—Rick Cohen

Another recipient of the Presidential Medal of Freedom is Native American activist Suzan Harjo. Read more about her here.