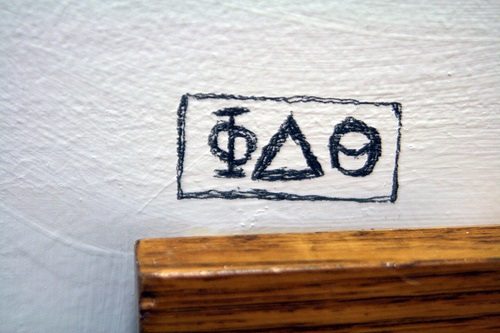 Following the launch of the White House’s “It’s On Us” campaign tackling sexual assault on campuses last week, eight national fraternities announced this past Tuesday that they will be working together to implement trainings to combat sexual assault, hazing and binge drinking on college campuses.

The eight participating fraternities are Lambda Chi Alpha, Phi Delta Theta, Pi Kappa Alpha, Sigma Alpha Epsilon, Sigma Alpha Mu, Sigma Chi, Tau Kappa Epsilon, and Triangle. These eight fraternities are forming a consortium to implement the Fraternal Health and Safety Initiative, which will impact an anticipated 35,000 undergraduate students in the first year of its administration. The trainings that are part of the initiative are created based on research and will take place in “retreat-like settings” for the students.

“If you think of the power of having all of these fraternities on a particular campus going through similar programming and similar messaging, it could definitely impact the culture on that campus fairly quickly,” said Marc Mores, executive vice president of James R. Favor & Company, an insurance company that works with campus fraternities and organized the initiative.

The idea behind the initiative seems to be to attack the drinking and assault issues embedded in college culture from the inside, through the areas of campus life that are statistically more likely to have these problems. A 2009 study showed that fraternity members are responsible for 55 percent of gang rape cases on college campuses. Likewise, a study conducted in 2007 by the founder and head of the nonprofit rape prevention organization One in Four indicated that fraternity men are three times more likely to commit rape than any other men on college campuses. These are just the statistics on fraternities and sexual assaults; in 2005, the University of Michigan found drug and alcohol abuse rates were higher among fraternity members than non-fraternity members.

Other schools are attempting to attack the problem of sexual assault by reforming the culture within fraternities themselves. Wesleyan University announced earlier this week that it would be mandating that fraternities accept female members in an effort to make the campus as “fair, inclusive and equitable as possible,” according to university spokesperson Kate Carlisle. On-campus fraternities, such as Delta Kappa Epsilon, have raised serious concerns and “strongly” disagree with a decision they say lacks “any facts—event opinions—about why Wesleyans feel it will be better off with co-education fraternities.” The university has not said definitively that this recent decision is a direct attempt to curb sexual assault rates on campus. However, the university has contended with several high profile assault cases involving campus fraternities.

Whether or not these initiatives will be helpful, it is certainly significant that national fraternities have recognized at all that sexual assaults and substance abuse are problems that have become synonymous with fraternity culture. In a column for the Guardian, Jessica Valenti wrote this past Wednesday, “While probably not all fraternities are hunting grounds for rapists and not all men who join frats (or varsity sports teams) are predators, when so much sexual violence is centered around one area of campus life, something has to be done.”—Shafaq Hasan