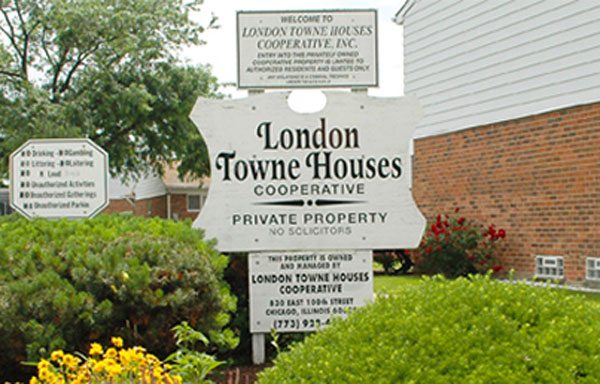 As Nneka McGuire and Nicholas Padiak note in the Chicago Tribune, “Co-ops hold a unique place in the history of combating housing discrimination and, for that matter, in the history of the United States too.” Hilary Silver, chair of the department of sociology at George Washington University, who specializes in the study of housing and homelessness, notes that the housing co-op idea “was, let’s cooperate and we’ll cut out the landlord, who was living off of our rents. It was like quasi-ownership. It was like creating a workers’ republic, almost. Let’s cut out the capitalists.”

Often, as in Chicago, a leading driver of co-op development was to provide housing for Black people and others who were denied housing on account of their race. Housing co-ops, in fact, were one of the few areas of the housing market where Blacks were able to avoid a highly discriminatory mortgage market. One of these co-ops that attracted working-class Black buyers was London Town Houses, an 803-unit complex spanning 50 acres that opened in 1967. A 2004 report noted that, “Demand for the initial phase of the development was so strong that the co-op was completely sold out in 18 months.”

Drivers of co-op development today are more about protecting residents from rising rents than fighting direct discrimination, but the co-op’s value is being rediscovered by a new generation. For example, a new Southside Chicago co-op that provides housing for 15 residents opened just last year in the Bronzeville neighborhood at 41st and Michigan. A Chicagoland co-op housing directory lists more than 30 housing co-ops, with a total of more than 2,500 housing units.

Large or small, new or old, these housing co-ops often foster a fierce sense of community. In the case of London Towne Houses, even 50-plus years after its founding, a number of the original residents remain.

JoAnn Kenner, age 73, who is currently president of London Towne Houses, is one of those residents. Kenner recalls that when she moved in, in a housing market that was highly hostile to Blacks, London was “like a breath of fresh air… This was a tremendous source of pride for residents, people were begging to get in.”

Different co-ops have different equity structures. Some are market rate, in which case they function similarly to condos. Others maintain the entire equity in the organization, which basically makes the co-op much like a nonprofit membership association. Others split the equity, with most of the equity staying with the association, but members getting a slice of the equity gain—or what is known as a “limited equity” co-op. London Towne Houses is one of these.

As such, most of the equity stays with the co-op when residents leave, but residents are able to keep a portion of the increase in value that occurs. As McGuire and Padiak write, “A member who leaves a co-op walks away with the value of his or her share. The value of a share can appreciate slightly over time, but equity growth is far more modest than in a traditional home.”

Residents, while not having the chance to make big bucks (or lose big bucks) at real estate, benefit in other ways. As McGuire and Padiak explain, “In exchange for limited equity growth, members in a co-op like London Towne Houses enjoy low monthly costs. Co-op residents—often referred to as member-owners—pay monthly fees called carrying charges. These include their share of the joint mortgage, taxes, insurance and operating costs like landscaping and trash pickup. Essentially, members divide the costs of owning and maintaining the property.”

“We call it having a house without the hassle. We’re below market rate,” Kenner explains. “It’s attractive to people that, you know, want to save money on housing. But we don’t just want people that are moving in because it’s cheaper; we want people that have that sense of community.”

Charles Daas, principal at the consulting practice City Solutions and chief editor of the 2004 report on Chicago co-ops mentioned above, notes that many co-ops in Chicago faded by the 1980s, as condos became a more popular housing option. But adds Daas, small co-ops are popping up again “in neighborhoods that are appreciating”—in Chicago, this includes such neighborhoods as Uptown, Edgewater, Rogers Park, Pilsen, Wicker Park, Logan Square, and the eastern side of Humboldt Park.

Josh Griffin, a retired police officer, has also been at the London Towne Houses co-op since its founding in 1967. Griffin speaks of the strong sense of community the co-op brings: “We’re close enough that we know our neighbors. One of my neighbors has a key to my house in case of emergencies, I have a key to his house.”

Last July, the cooperative celebrated its 50th anniversary. The celebration lasted all day and included yoga classes and live entertainment.

“This co-op provided a haven and a home for a lot of people, did a lot of people good,” Griffin says and “it still has that possibility.” Moving in, he adds, has been “the best deal I ever made in my life.”—Steve Dubb

Where Are New Co-ops Emerging? The Changing Map of Co-op...

Co-op Organizing in Dayton: Sustaining Movement for the Long...