A Boom in Solar Jobs 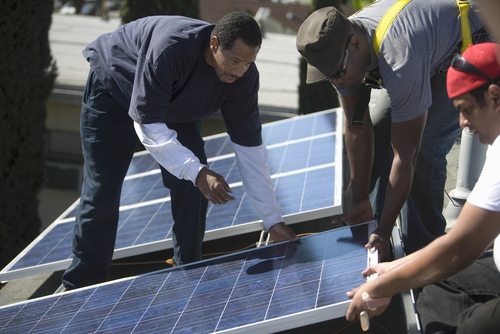 Vox senior editor Brad Plumer writes that the number of jobs in the U.S. solar industry is catching up with jobs in coal. According to a survey from the Solar Foundation, there are 174,000 people currently employed in solar, and the industry expects to add another 36,000 in 2015, above the 31,000 jobs in solar that were added in 2014.

Critics might suggest that the Solar Foundation is a biased source of information, given its mission “to increase understanding of solar energy through strategic research that educates the public and transforms markets.” But with an expanding industry that involves labor-intensive design, manufacturing, and installation, the Foundation’s findings about solar industry employment seem reasonable.

This isn’t the first jobs census conducted by the Solar Foundation. The overall job growth, year to year, is as follows:

This includes people whose work isn’t 100 percent solar, though most of the employees are.

The distinction, as Plumer notes, is that solar provides less than one percent of the nation’s electricity, but coal generates 39 percent. However, new coal plants aren’t in the offing, while solar installations are increasing all the time; in fact, over half of the solar jobs are in installation, only 19 percent are in manufacturing.

While solar has a long way to go to catch up with coal, the industry is expanding—every week, according to President Obama in his 2015 State of the Union, the nation brings on more solar power than existed in the entire U.S. in 2008. The costs of solar are coming down, which will spur even more solar expansion. And unlike coal, solar doesn’t cause the environmental pollution that is spurring climate change. As Plumer notes:

“If power plants had to internalize all [the social costs of coal—soot, mercury, coal ash, carbon dioxide emissions], then sources like wind, solar, or even nuclear power would be far more competitive…. In other words: It would be a major boon for clean energy if solar power keeps getting cheaper and less labor-intensive over time. But getting fossil-fuel users to pay for all the external costs they impose would also make a huge difference.”

If this is the direction of our energy economy, the challenge for national policy is to put together a plate of the most effective incentives for solar and other clean energy technologies, and the challenge for nonprofits is to advocate for the policies that make clean energy work. The Solar Foundation survey results seem to suggest that on this issue, the nation is heading in the right direction.—Rick Cohen