A Food Co-op Meeting for the Books: Park Slope Rises Up! 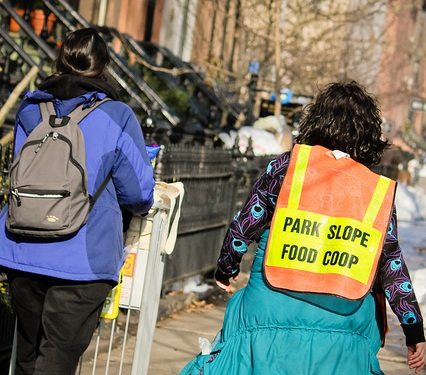 NPQ believes deeply that all enterprises and individuals need to think much more carefully about where they spend and invest their money because the act of spending and investing is powerful. Generally, we believe that the kinds of discussions described below need to occur way more often. So we laud the Park Slope Food Coop for taking itself seriously in the arena of Middle East Politics because we all should. That said…

Last night at the 39-year-old Park Slope Food Co-op in Brooklyn, members turned out in force to decide whether or not to hold a referendum on a proposal to boycott products made in Israel. The store has 16,300 members and the meeting reportedly attracted 2,000 of them. Co-op members who also belong to Boycott, Divestment and Sanctions (BDS), an international organization that is trying to force the Israeli government to change its policies toward Palestinians (which would include withdrawing from the Palestinian territories), were advocating the boycott.

After hours of heated discussion, the referendum proposal was soundly defeated but this article from New York Magazine is well worth reading to get a true flavor of the meeting. After establishing ground rules for the meeting, many of which were then ignored, here is a snippet from reporter Chadwick Matlin of what went down:

“What followed was nearly two hours of a community in conflict with itself. There had been so much hype, so much expectation, so much plotzing over the past six months that the boycott issue had grown far larger than the coop. It had become about what Park Slope—no, Brooklyn—no, New York City—no, America thought about Israeli-Palestinian politics. The store actually only sells a half-dozen Israeli items, but that didn’t matter. This vote—this vote to have a vote—was about the kind of beacon the coop wanted to be. Did it really care about being a progressive organization? And if so, what was the more progressive option? The one that excluded Israel in the name of human rights? Or the one that included it in the name of political and religious diversity? And how would taking sides affect the coop’s supply of vegan marshmallows?”

He then goes on to write that “by the time the vote was taken, the Beastie Boys had been quoted twice—coop members were asked to fight for their right to party—a midwife, citing her experience delivering both pro- and anti-boycott babies, had implored everyone to play nice, and a woman pleaded for peace: “Please, make it stop!” she said. Dayenu! Also, a man compared the meeting to an enema.”

But so it goes. The Daily Show made brutal fun of it all but NPQ knows many people who have been made fun of while doing something that eventually proved worthwhile. According to Matlin, there were 653 votes in favor of a referendum and 1,005 against it. – Ruth McCambridge