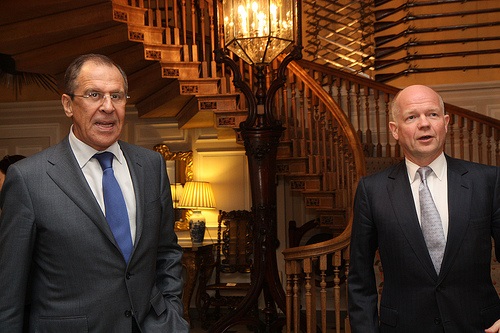 April 10, 2015; The Ministry of Foreign Affairs of the Russian Federation

Schastlivoy Paskhi (Happy Easter) to you too, Foreign Minister Sergey Lavrov! The transcript of your talk to Russian NGOs was quite entertaining and instructive for us Americans.

On the positive side was your remark that your meetings with the NGOs are a regular tradition, reflecting your belief that President Putin recognizes “the importance of partnership between the government and civil society.” You even acknowledged that NGOs “can provide…a wider perspective on many issues than that of traditional diplomacy.”

All that is true, but the track record of the Putin government isn’t quite as friendly toward NGOs, particularly domestic NGOs, as your words implied. Here in the U.S., we remember the 2012 law enacted by the Duma that called for NGOs deemed to be engaged in “political activity” with the support of foreign funding to register as “foreign agents,” which in Russia is commonly interpreted to mean “spies.” In 2013, the government began what Human Rights Watch called “a nationwide campaign of intrusive inspections” of groups that the government deemed to be foreign agents. Fifteen groups have chosen to shut down rather than “wear the shameful ‘foreign agent’ label,” including the internationally respected voting rights organization known as Golos.

According to the Moscow Times, the Justice Ministry conducted more than 7,000 surprise and planned inspections of NGOs and fined more than 200 for violations. The announced plan this year is to inspect 6,296 NGOs. If the inspections were to ensure that the NGOs were well governed and had proper financial controls, that would be useful, but to investigate them because of their political advocacy linked to their receipt of funds from foreign donors smacks of suppression of dissidents, a practice that was characteristic of the former Soviet regime and looks like it is being emulated to some degree by President Putin’s government. Among the organizations that were fined by the Justice Ministry was the Sakharov Center, named after Soviet-era dissident Andrei Sakharov, which, the Times notes, hosted the wake of the assassinated political critic Boris Nemtsov.

While the Sakharov Center was slapped with a 300,000-ruble fine, the largest fine levied against NGOs for failing to register as foreign agents was 400,000 rubles, assessed against the Regional Press Institute. Having already been subjected to inspections, RPI had refused to comply with the registration law. The fine was paid by RPI’s 73-year-old director Anna Sharogradskaya from personal funds as well as a few kopecks of donations. The purpose of RPI is to “facilitate the establishment and development of independent media in Russia that could become the basis for a stable democratic society.” We agree with Sharogradskaya that a vibrant independent media is an essential component of democratic society.

Why had RPI received foreign grants? Because, as Sharogradskaya explained, there are “hardly any Russian sources [that will] give money for freedom of the press.” The Justice Ministry explained that RPI had held public events that “formed public opinion” for the purpose of “influencing the decision-making of state authorities aimed at changing state policy,” which, if true, seems like a very legitimate role for domestic NGOs. Sharogradskaya alleges that the foreign agent law really aims to “exterminate…free thinking among people independent of Russian funding.” That is what it looks like to us as well, sad to say.

You charge that the United States uses “an impressive number of pressure tools to dish out to any dissenters, from unilateral sanctions to open invasion,” which is true to some extent on the international stage. However, what is distinctive about the U.S. and apparently not shared in practice by the government of the Russian Federation is the willingness of domestic nonprofits to rise up and challenge government policy—such as criticizing the U.S. invasions of Iraq and Afghanistan, challenging the isolation of Cuba, and questioning much of the U.S. government’s domestic policies. We suspect that the Obama administration is not much more a fan of the strident criticism it gets on its foreign and domestic policies than President Putin is about his actions, but despite charges and countercharges, NGOs critical of government policies flourish here, operating with the support of institutional and individual donors, and aren’t compelled to self-identify as putative foreign spies.

While your speech lauds the activities of Russian NGOs on the international scene, participating in United Nations bodies such as the Economic and Social Council, your government’s policies of actively investigating and suppressing dissident NGOs are being copied by countries such as Kazakhstan and Armenia under pressure from the Russian government. In fact, the Russian ambassador to Armenia, Ivan Volynkin, called on Armenia to “neutralize” Armenian NGOs that “created obstacles” to Russian-Armenian relationships.

In fact, your speech fails to recognize one of the most important roles of NGOs, whether in Russia or here in the U.S. It is their distinction and separation from government. They stand apart from government (and from the business sector) and their criticism of government policy, their political dissidence, is critically important for democracy. Your speech looks to Russian NGOs as helping the Russian Federation in its international diplomacy with the European Union, the U.S., and the other members of the BRIC countries. You might think about being just as pleased if NGOs function as tough critics, holding your government to its public commitments to, in your words, “the promotion of an integrated, peaceful and future-oriented agenda…to effectively resolve important global and regional problems based on key principles of international law…and respect for all nations’ rights to determine their own future without external interference.”

Strong NGOs, including those that don’t agree with you and President Putin, just like NGOs that challenge President Obama here—and, as we note, NGOs committed to an independent media—are crucial to a healthy civil society both in Russia and in the U.S.—Rick Cohen