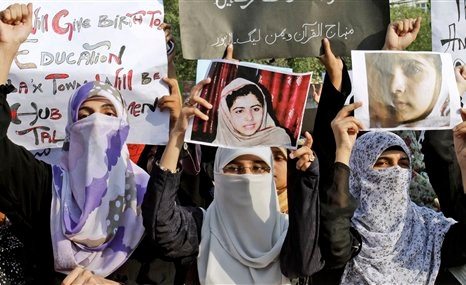 An online petition that has gathered more than 38,000 signatures on Change.org calls for nominating 14-year-old Malala Yousafzai for the Nobel Peace Prize for her courageous efforts. The Taliban in Pakistan attempted to murder Malala earlier in October for advocating for women’s education rights and documenting the Taliban’s destruction of schools. Malala is still recovering from the attack at the Queen Elizabeth Hospital in Birmingham, England. CNN reported that Malala’s parents arrived in England yesterday to reunite with their daughter, who was able to get up and communicate. Malala’s father, Ziauddin Yousafzai, managed a school in Pakistan’s conservative Swat Valley and kept the school open to girls despite the Taliban’s opposition.

The petition was created by Tarek Fatah, a Canadian writer and secular Muslim activist who urges “all Canadian political party leaders to unanimously nominate Malala.” The Change.org request reads:

A Nobel Peace Prize for Malala will send a clear message that the world is watching and will support those who stand up for gender equality and universal human rights that includes the right of education for girls.

Online activism for Malala’s nomination has also extended to Twitter, where those using the hashtag #Nobel4Malala are spreading the word and encouraging others to sign on.

Malala is also drawing support in local communities in the U.S. For instance, the Post Independent has reported that nonprofit activists Silbi Stainton and Jodi Fischer have been closely monitoring the Malala Yousafzai case and are now collaborating with an international board of directors through the Marshall Direct Fund to establish two schools (one for girls and one for boys) and two vocational centers for women in Pakistan. The Marshall Direct Fund website states, “Sometimes it takes a hero to notice or be reminded what is important…After being hunted down and shot in the head by the Taliban while boarding her school bus on October 9, 2012, she now has the world’s attention.”

Although the tragic near-death of Malala is a heartbreaking story, to see so much passion and support emerge globally truly shows the influence of online activism and the incredible abilities of individuals to transform a devastating event into a powerful movement. –Aine Creedon