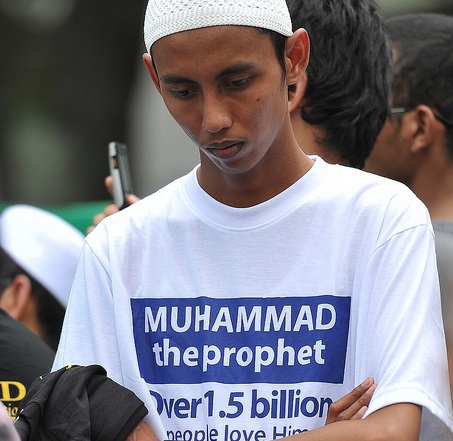 Here are two stories of voluntary actions of quite different kinds involving freedom of speech and mutual tolerance.

In Phoenix last week, a guy named Jon Ritzheimer organized a protest in front of a mosque at the Islamic Community Center to protest a “tyranny of Islam” that exists in the U.S. Although the idea of a reign of Islamic tyranny might be new and generally unknown in the experience of many Americans, Ritzheimer believes it is real and needs to be confronted. “I would love to see more of these events pop up in other states,” Ritzheimer was quoted as saying in an article by Evan Wyloge from the Arizona Center for Investigative Reporting. “I want fellow patriots standing right here next to me. This isn’t about me. Everybody’s been thinking it, I’m just saying it.”

Some 250 people showed up for Ritzheimer’s protest at the mosque, some wearing T-shirts with profane commentary about Islam. This protest was much larger than Ritzheimer’s previous effort a couple of weeks earlier at the Islamic Community Center, which only attracted a few dozen similarly minded people. Why the Phoenix Islamic Community Center? It may be because the two men who drove to Dallas with the intention of shooting at participants at a Dallas event promoting cartoon drawings of the Prophet Mohammed had worshipped at the Center’s mosque. At last week’s rally, Ritzheimer encouraged people to carry weapons. Some did, including Ritzheimer himself, who carried a 9mm Glock. (Since the protest, Ritzheimer has said he has gone into hiding with his family due to terrorist threats.)

The press coverage of Ritzheimer has made him out as something of a lone wolf, a former marine reacting to the Islamophobic rally in Dallas. For protests like this, however, organizers usually have some organizational connections, no matter how ephemeral. A couple of sources identified the Phoenix anti-Islam protesters as “bikers” and Ritzheimer as a member of a Phoenix motorcycle club. A Facebook page for Ritzheimer notes that he works for an entity called “Dysfunctional Veterans,” something of a social community for veterans who appear distinctly unhappy with the political direction of this nation vis-à-vis Islam and much more.

Ritzheimer and his colleagues, either as bikers or dysfunctional veterans, make up one part of this story. The other part concerns the Islamic Community Center. The president of the Islamic Center, Usama Shami, was not surprised by Ritzheimer and his colleagues. “This is not new. Hatred, bigotry, racism—that’s old. It’s the same thing,” Shami said. “No different from Nazis or neo-Nazis.” It was obvious to Shami and anyone looking at the protest that Ritzheimer was hoping for a confrontation. “The whole point of bringing guns—these are not peace tools, these are meant to intimidate people,” he said. “The whole issue with cartoon drawing is to inflame emotions and hoping that someone will cross the line,” he added. “We’re not going to be falling into that trap, we understand what he’s trying to do.”

“We should remind ourselves that we do not match wrongness with wrongness, but with grace and mercy and goodness,” Usama Shami told worshippers during Friday prayers. And in two instances reported on by the Washington Post, that is what actually happened:

“Jason Leger, a Phoenix resident wearing one of the profanity-laced shirts, accepted an invitation to join the evening prayer inside the mosque, and said the experience changed him.

“‘It was something I’ve never seen before. I took my shoes off. I kneeled. I saw a bunch of peaceful people. We all got along,’ Leger said. ‘They made me feel welcome, you know. I just think everybody’s points are getting misconstrued, saying things out of emotion, saying things they don’t believe.’

“Paul Griffin, who had earlier said he didn’t care if his T-shirt was offensive, assured a small crowd of Muslims at the end of the rally that he wouldn’t wear it again.

“‘I promise, the next time you see me, I won’t be wearing this shirt,’ he told one man while shaking his hand and smiling. ‘I won’t wear it again.’”

NPQ has already covered the retraction of a scientific study coauthored by a political science professor at Columbia University and a graduate student from UCLA that had erroneously and dishonestly contended that 20-minute one-on-one conversations with gay canvassers could change voters positions on same sex marriage. Just because the study was unsupported does not make the premise vapid, and this may be a good example: Interactions with Muslims changed, at least for the moment, the attitudes of two of the anti-Muslim protesters. The efforts of Shami and others at the Islamic Center to simply introduce some of the protesters to the worshippers at the mosque, the “bunch of peaceful people” that Leger meet, may not change the minds of ideologues and bigots, but for some people, meeting Muslims might reveal the shared humanity that Ritzheimer and his other adherents cannot perceive.