A Tale of Two Governmental Hypocrisies: US and Russia Deal with Ed Snowden 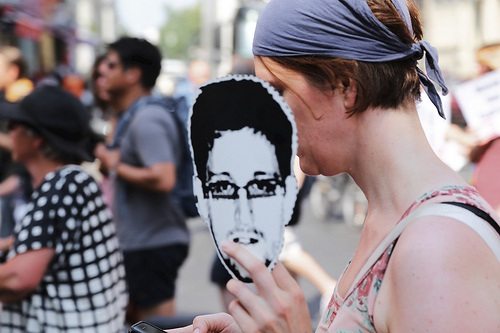 NSA leaker Edward Snowden faces prosecution if he returns to Barack Obama’s United States, so he has sought temporary asylum in Vladimir Putin’s Russia. Neither option is probably all that attractive to Snowden, though he apparently prefers a location in Russia that isn’t a jail cell over a federal penitentiary stateside. Although Snowden just won the 2013 Whistleblower Award, given by a coalition that includes the nonprofit Transparency International, frequently cited in the NPQ Newswire for its anticorruption work (for example, here and here), the Obama administration doesn’t view him as a whistleblower, and the Putin administration isn’t exactly known as a protector of free speech, much less whistleblowing.

There’s a lot of hypocrisy flying around in the wake of Snowden’s disclosures and subsequent hightailing it out of the country.

The hypocrisy on the part of the U.S. is the announcement by President Obama to call for reforms in the oversight and operations of the NSA. At his press conference, the President said, “I don’t think Mr. Snowden was a patriot, as I said in my opening remarks, I called for a thorough review of our surveillance operations before Mr. Snowden made these leaks. I actually think we would have gotten to the same place. And we would have done so without putting at risk our national security.”

Let’s see. Earlier in the week, the President said (on Jay Leno’s show) “we don’t have a domestic spying program.” Later, in his press conference, he assured Americans that the NSA was not abusing the information it collected, but his announced reforms would assure the public that there was no abuse. Earlier this year, the Obama administration’s director of national intelligence, James Clapper, assured Congress that the NSA wasn’t collecting information on millions of Americans, but that answer was obviously less than candid. Until the President’s announcement this week, the Obama administration had refused for four years to release to Senators Ron Wyden (D-OR) and Jay Rockefeller (D-WV) the FISA court’s interpretation of Section 215 of the Patriot Act (the provisions covering the collection of telephone metadata).

In other words, the President is saying that he was actually concerned about disclosure and transparency regarding the NSA process before Snowden made his disclosures and he would have called for this review, Snowden or no Snowden. That may have been true—he was on the record as concerned about the NSA and the Patriot Act, especially as a senator, but as president, he vigorously defended the NSA’s practices and his spokespersons denied that the NSA was doing what Snowden revealed it to be doing. Now, while the Obama administration tries to bring Snowden to trial, the president is instituting some transparency into the NSA process.

It’s an old political ploy, unfortunately. Events force a politician’s hand, compelling a change of position (think of Joe Biden forcing the president’s hand on gay marriage), and the politician says that it was his plan all along. The President’s call for NSA reforms cuts short congressional efforts led by Senator Richard Blumenthal (D-CT) and Rep. Adam Schiff (D-CA) to mandate increased NSA transparency, and groups like the American Civil Liberties Union think that the president’s proposed reforms don’t go far enough, but it is a big change from the administration’s previous stance that all was right with the NSA. It’s typical politics, but a little bit hypocritical.

Putin’s hypocrisy? Where to begin? How about the fact that the Russian government’s audits of NGOs of “potentially unwanted political activities” included a governmental raid of the Russian offices of Transparency International itself? That won’t make Snowden feel particularly secure should Putin’s priorities change.

Imagine if Snowden were a Russian revealing the detailed files of its NSA counterpart. Sergei Nikitin, the head of Amnesty International Russia (which, by the way, was also “audited” by Russian police), told the Guardian in the UK, “We could probably expect a diametrically opposed reaction.” The first independent NGO that was audited and then suspended by Russian authorities was Golos, a voting rights group, as part of what Human Rights Watch described as a “crackdown” on Russian civil society. The litany of human rights activists and civil society organization leaders who have been detained or arrested by Russian authorities is just about unending.

How is Russia on free speech issues? Don’t ask the members of the all-women punk rock band, Pussy Riot, who were arrested and tried with aggressive overenthusiasm by the Russian government for a guerilla performance in Moscow’s Cathedral of Christ the Savior. Three of them were convicted of hooliganism, with two eventually sent to prison for two-year terms.

Protest that falls short of punk rock performance art isn’t looked upon favorably by the Russian authorities, either. Alexsei Navalny, a well known anti-corruption blogger, has been on trial for his protest activities (though the official charges is embezzlement). Journalist Elena Milashina, a writer with the independent newspaper, Novaya Gazeta, was viciously beaten by unknown attackers. In 2006, the courageous Russian journalist, Anna Politkovskaya, known for her criticism of Russia’s actions in Chechnya, was found murdered in the lobby of her apartment building. According to Freedom House, “the already repressive press freedom environment in Russia declined even further with Vladimir Putin’s return to the presidency in 2012, as authorities relied on both crude and sophisticated forms of media management to distract the public from terrorist attacks, economic troubles, and antigovernment protests”. Between 1992 and 2011, 84 Russian journalists had been murdered or “disappeared”, which Journalism Without Walls describes as a rate “among the worst in the world.”

Good luck, Edward Snowden, for finding temporary asylum in a bastion of free speech like Putin’s Russia. Good luck, President Obama, with implementing necessary changes in the operations of the NSA that probably would not have occurred or perhaps even been considered hadn’t Snowden made his revelations to the Guardian’s Glenn Greenwald.—Rick Cohen