A Tale of Two Moralities: The NFL on Racial Team Names and Gay Team Players 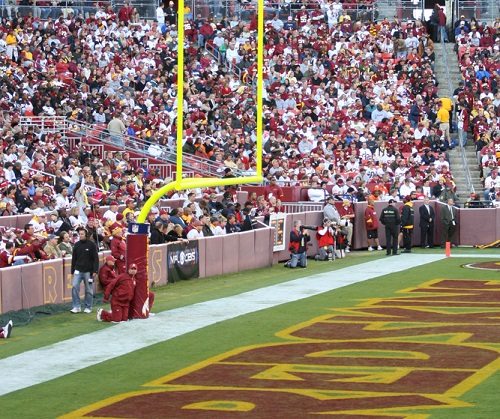 At the Super Bowl, National Football League Commissioner Roger Goodell gave his “State of the NFL” speech and then took questions. In response to a question about whether he would feel comfortable calling a Native American a “redskin” to his face, Goodell explained clearly where the NFL has come out on the controversy regarding the team name of the Washington, D.C. NFL franchise:

With none of the wiggle room from his statements of past years, Goodell’s new answer isn’t hard to understand.

The Washington team’s owner, Dan Snyder, has won his case with the NFL establishment to keep the current name of the franchise intact, but not necessarily with other constituencies. In Congress, Republican Tom Cole and Democrat Maria Cantwell have written to Goodell to sway him toward changing the name of the league’s Washington, D.C. franchise. Despite Goodell’s contention that the derogatory name is actually popular, their joint letter to Goodell notes that national civil rights organizations such as the National Congress of American Indians, NAACP, the Anti-Defamation League, the Rainbow Coalition, and the League of United Latin American Citizens have come out condemning the team’s name and calling strongly for a change.

Contrary to some of the commentary on sports talk radio, the letter doesn’t explicitly threaten the NFL’s tax status. The relevant line in the letter reads, “It is not appropriate for this multibillion dollar 501(c)(6) tax-exempt organization to perpetuate and profit from the continued degradation of tribes and Indian people.” However, separately, Cantwell said she would look into changing the NFL’s tax status in order to convince the NFL to change its position. “You’re getting a tax break for educational purposes, but you’re still embracing a name that people see as a slur and encouraging it,” she is quoted to have said.

Redskins spokesman Tony Wyllie responded, in an emailed statement, “With all the important issues Congress has to deal with, such as a war in Afghanistan to deficits to health care, don’t they have more important issues to worry about than a football team’s name? And given the fact that the name of Oklahoma means ‘Red People’ in Choctaw, this request is a little ironic.”

Probably equally ironic is that the name of the Washington team was given to it by its legendary owner, George Preston Marshall, who was considered the leading racist owner in the NFL. He was the last owner in the NFL to integrate his team, and did so only after the intervention of attorney general Robert F. Kennedy, who made the extension of the team’s lease for what would later become RFK Stadium contingent on breaking the racial barrier in Washington professional football.

On the heels of the Cole/Cantwell letter, University of Missouri defensive end Michael Sam, entering the upcoming NFL draft, announced what his Mizzou teammates already knew, that he was gay. Predicted to be drafted in the middle rounds—maybe the third round of the draft, because Sam is a little undersized at 6’2” and 260 pounds for a defensive end—Sam’s joining the NFL will break the sexual identity barrier in America’s most macho sport.

Unlike its stance on derogatory names of racial groups, the NFL issued a politically correct statement on Sam’s announcement: “We admire Michael Sam’s honesty and courage. Michael is a football player. Any player with ability and determination can succeed in the NFL. We look forward to welcoming and supporting Michael Sam in 2014.” The statement underscores the idea of the NFL, in player teams, as the ultimate meritocracy—if you can play, that’s all that matters.

Eight NFL coaches and executives told Sports Illustrated—off the record, however—that they expected “a significant drop in Sam’s draft stock” as a result of his statement, even though he was and will be the same player despite his Sunday evening revelation. One former general manager said that teams would drop Sam’s standing in the draft “unless he’s Superman.” SI reported that many NFL execs were questioning what prompted him to do that, suggesting that his future earnings would be negatively affected. “Not a smart move,” according to one NFL assistant coach.

On one issue, the tax-exempt NFL (though not quite an “educational” institution, as Sen. Cantwell mischaracterized it) chooses to defend and perpetuate a racially insulting name as a team name. On another, it issues a brief but appropriate statement about a gay football player, though executives from around the league make it clear that the NFL’s public PC stance doesn’t match the underlying sentiment among many teams. Regarding both Native American team names and gay players, the NFL shows that it has a long ways to go before it really catches up to the big leagues of open, tolerant, and accepting contemporary society.—Rick Cohen