A Village of Arts and Humanities in North Central Philly 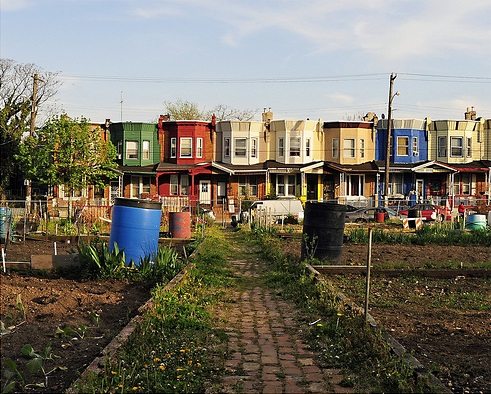 For 25 years, the Village of Arts & Humanities in North Central Philadelphia has been building community and engaging its neighbors in “self-expression rooted in art and culture.” What began as an effort to involve neighborhood children in reclaiming one vacant lot as an art park, led by artist-activist Lily Yeh, has grown to encompass The Village Heart, a four-square-block area that now includes 14 art parks and nine program buildings, all integrated into a residential neighborhood. This summer, The Village, which has long been recognized for its groundbreaking work in creative placemaking and youth arts initiatives, introduced a new program, SPACES: Artists Residency at the Village. Three artists or artist groups—King Britt, Amber Art + Design, and the People’s Library and Paper Collective—were selected for this initial cycle of the SPACES program, and have been living and working in The Village since June.

Two ambitious projects have resulted from these collaborations: a new neighborhood recording label and radio show; and a new outdoor community dinner venue, which will feature reimagined, healthier versions of recipes collected from residents, reflecting the geography and culture of the neighborhood.

SPACES Episode 1: Designing Together from The Village on Vimeo.

Both projects—highlighted in this first documentary video from the SPACES program—are described as creating “places of belonging.”—Eileen Cunniffe