Across the Nation, Real Efforts to “Reclaim” MLK Day 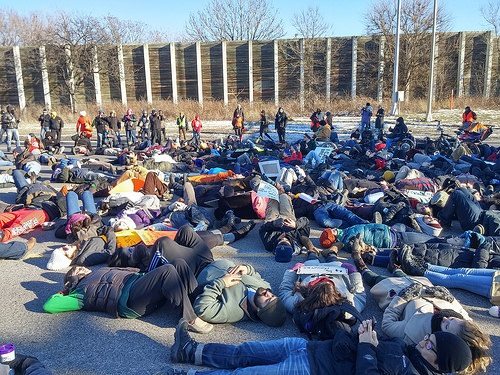 It’s certainly not because of NPQ’s call to “take back MLK Day,” but around the nation local groups are taking a more assertive, more political approach to celebrating the Martin Luther King Jr. Day holiday. In Philadelphia, for example, the new MLK D.A.R.E. coalition (“Day of Action, Resistance, and Empowerment”) is hoping to assemble 10,000 people in Center City for a protest march. The Philadelphia marchers have concrete demands in mind: an end to “stop and frisk” police tactics, the creation of a police oversight board, a raise of the local minimum wage to $15 an hour, and a democratically controlled school system.

The obvious impetus this year, as distinct from years past, is the series of killings of unarmed black men—some at the hands of vigilantes (as in Florida), others by policemen (in Ferguson, Missouri, and Staten Island, New York, to name the sites of two such incidents). “We can no longer just sit back and watch our children be killed in the street,” said Kendra Brooks of Parents United, a vocal and respected public education advocacy group. “The Day of Service has kind of depicted [Reverend King] in a passive way, and he wasn’t passive—he believed in direct action.”

The MLK D.A.R.E. Coalition’s plans resonate with the announcement from Ferguson Action of a strategy to #ReclaimMLK Day from January 15th through the official MLK Day holiday on January 19th. The Ferguson Action website explained the “reclaim” rationale as follows:

“Dr. King’s legacy has been clouded by efforts to soften, sanitize, and commercialize it. Impulses to remove Dr. King from the movement that elevated him must end. We resist efforts to reduce a long history marred with the blood of countless women and men into iconic images of men in suits behind pulpits.”

The several ministers involved in the Philadelphia plans would apparently agree. “While we recognize the importance of service, Dr. King was not assassinated because of his charity work. He was assassinated because he challenged the status quo,” said the Rev. Mark Tyler of Mother Bethel A.M.E. Church, identified in the Inquirer article as a leader of the coalition. “We only do honor to his memory if we continue to fight the same fight.” “We’re seeking to reclaim his legacy, the legacy we think is critical to justice in this country,” added Sharon Gramby-Sobukwe, a minister at First Corinthian Baptist Church.

Among the Ferguson Action-listed events to occur on Martin Luther King Jr. Day itself are the Atlanta MLK Day Weekend of Resistance scheduled to start in Underground Atlanta, the #HandsUpKY Martin Luther King Jr. Freedom March to be “hosted” by the Lexington-Fayette Urban County Government and the University of Kentucky, and a four-mile march and die-in to start at Chicago’s historic Water Tower.

Here is the challenge: In more mainstream and conservative press outlets, a pushback against the Ferguson- (and Staten Island-) related protests has begun, particularly since the killing of two New York City policemen by Ismaaiyl Brinsley. Police union officials in New York City somehow blamed Mayor Bill de Blasio for contributing to an environment that made the police the enemy or, at a minimum, not “having their back.” In a scathing criticism of Mayor de Blasio, Wall Street Journal op-ed writer Dorothy Rabinowitz wrote that the killings of officers Rafael Ramos and Wenjian Lieu “demolished whatever shard of public sympathy was left for the marches and denunciations of the police.”

The logical questions for Nonprofit Quarterly Newswire readers are: