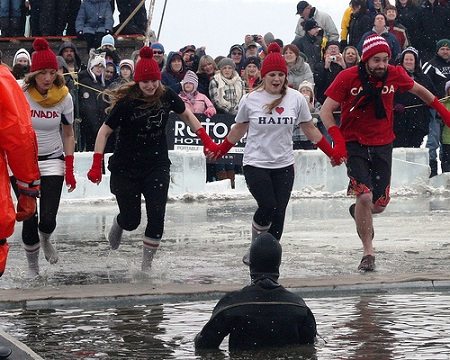 Everywhere one looks, people are jumping into frigid bodies of water. These events go by a variety of names that conjure the frozen tundra of the Arctic: the polar plunge, the polar bear dip, the penguin plunge, and so on. While some of these “polar bears” are testing the wintry waters for the thrill of it, many of them are “freezin’ for a reason,” putting their bravado to use for any number of charities and causes. Such was the case in Westport, Conn., where the recent New Year’s Day festivities included two separate groups running around in the ocean at Compo Beach. One group, organized by a local temple, raised about $34,000 for United Cerebral Palsy of New York City while another collected $3,000 for Save the Children.

On the opposite end of the U.S., more than 1,000 people in Anchorage, Alaska recently braved the bitterly cold water of Goose Lake for the sake of the Special Olympics. In Boulder, Colo., locals participated in what KUSA-TV called “an extremely uncomfortable New Year’s Day tradition” in support of the Alzheimer’s Association of Colorado. In Rye, N.Y., people took a quick dip in Long Island Sound for the MAC Angels Foundation, a nonprofit providing assistance to families affected by Amyotrophic Lateral Sclerosis (ALS), or Lou Gehrig’s disease. A little south of that plunge, more than 600 people in the Ocean City, Md. area raised, it is estimated, “more than $80,000 for the philanthropic arm of Atlantic General Hospital.” And the list goes on and on…

Where did all of these charitable forays into numbing waters spring up from? The Boston Globe provides some useful historical context:

“The ritual of dunking oneself in icy water is ancient, found throughout the world’s cultures, and has been going on for millennia in Massachusetts, courtesy of the Wampanoag, who are thought to have participated in dousing rituals as far back as 5000 BC. But the New Year’s Day group plunge, which began in North America in 1901 with the L Street Brownies in South Boston, has boomed in popularity, with more and more organized swims across the country.”

Nonprofits looking to put a creative twist on an annual fundraising event that may have grown a bit stale might consider taking a page from the polar plunge playbook: not only do people like supporting a good cause and having fun, but if they can get a chance to demonstrate an admirable quality (in the case of the plunge, a dash of daring), it’s all the better. –Mike Keefe-Feldman